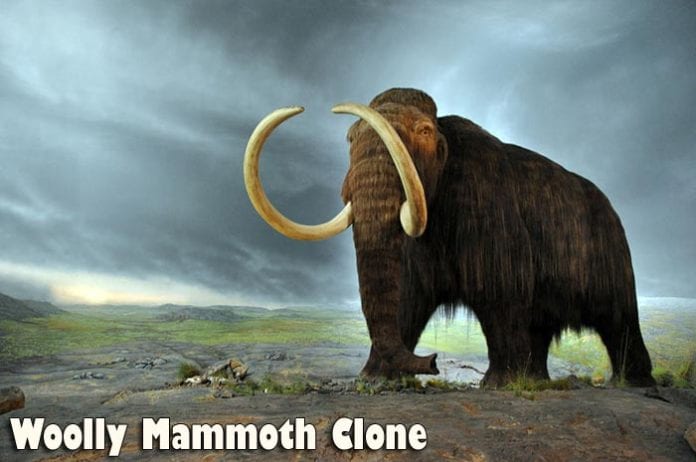 Woolly Mammoth Clone: According to studies, the planet is now in the midst of mass extinction for the sixth time, with the fifth one being the extinction of dinosaurs. Thanks to perilous anthropogenic activities, about 30 to 160 species seem to vanish every passing day.

Since 1500, an estimate of more than 300 animal species (e.g., birds, mammals, amphibians and reptiles) has already disappeared. While the number is still not specific, many scientists think that the rate of species disappearance is the greatest in the Earth’s history.

For many years now, the idea of resurrecting or reviving animals from extinction has always been the aim of numerous scientific studies. With the advancement of technology, this dream is now speeding closer to being a reality.

Among many species in the animal kingdom, the Woolly Mammoth and the Passenger Pigeon are the top priority. These two species were once functionally distinct species, and after their extinction, the habitats they once lived in, changed drastically.

In this page, we will explore on the large hairy Woolly Mammoth and the studies being done concerning it. Extinct for thousands of years, can the Woolly Mammoth be resurrected?

Wouldn’t this be fascinating? Moreover, how much would a phenomenon in science will this be?

What exactly is a Woolly Mammoth?

Woolly Mammoths (Mammuthus primigenius) were elephant-like creatures that lived more than 120,000 years ago (from Pleistocene epoch to Holocene epoch), long after the dinosaurs went extinct.

Woolly Mammoths are believed to share a common ancestor with modern-day elephants, only that the former is more adapted to colder climates. However, the exact phylogeny and how divergence occurred over time is still not elucidated.

Known as the Woolly Mammoth Project, the de-extinction project is spearheaded by a Harvard-based team with Dr.George Church as the team leader. The cloning process will utilize the CRISPR genetic engineering process to copy and paste Mammoth genetic material into live fibroblast cell cultures from elephants.

In order to get a hold of the Woolly Mammoth DNA, scientists, before this current project, obtained bones from a Woolly Mammoth that existed more than 12,000 years ago. After that, DNA fragments from the bones were amplified to generate numerous copies of the target genes.

Fortunately, a lot of these DNA fragments overlapped, so scientists were able to get a picture of what the genome looks like. The results of the analyses showed that the Woolly Mammoth has more than 95.8% similarities with the modern-day Asian elephant.

What is the goal of the revival?

As the developments and innovations in the field of biotechnology continue to increase, the idea of reviving an extinct species may come true in the future. The Woolly Mammoth is such an ideal species to be resurrected because some intact mammoth fossils are still available and that it still has close living relatives at present.

The Drawbacks of the Woolly Mammoth Revival

Of course, when there are advantages, there are also the disadvantages attached with the revival of the Woolly Mammoth. One of the biggest enemies of animal cloning is ethics. Like any other scientific procedure that involves the manipulation of natural creation, de-extinction via cloning process is deemed to be unethical and is contrary to the religious and moral views of many people.

Indeed, reviving a living organism is, if not impossible, very difficult. While the Woolly Mammoth is such an ideal candidate for this, there are still ongoing debates whether doing such is possible. On the other hand, some believe that reviving species is no longer considered a “what if” but rather a “when” question.

However, can the resurrection of the Woolly Mammoth bring good to humanity or will it just cause the other way around? What do you think?