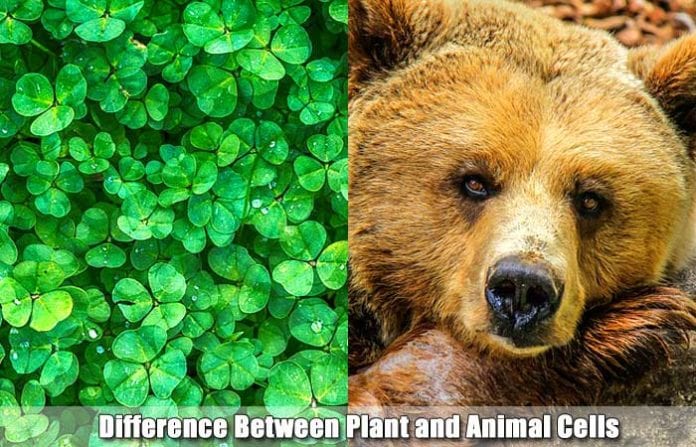 Differences between Plant and Animal Cells: Plants and Animals consist the major kingdoms of Domain Eukarya. On the one hand, Kingdom Plantae is composed of multi-cellular (although some are unicellular) autotrophic organisms. At present, it is estimated that the total number of plants is 400,000 while of course, a lot remains undiscovered.

On the other hand, the members of the Kingdom Animalia make up more than three-fourths of all species found on our planet. They typically range from the simplest, like the sponges and corals, up to the most developed one like humans.

Regarding physical appearance, plants undeniably are distinctly different from animals. But what about inside them? Do they differ too? Well, in this post, we will explore the answer to that question!

We will discuss plant cell vs animal cell, everything at the cellular organization level. Check out the difference between prokaryotic and eukaryotic cells as well.

What are Plant Cells?

Like any other eukaryotic cells, plant cells that have their genetic material enclosed in the nucleus and have membrane-bound organelles. One of the most distinctive features of plants cells is the presence of cell wall apart from the cell membrane itself.

What are Animal Cells?

Animal cells are also a type of eukaryotic cells that contain a “true nucleus” and membrane-bound organelles enclosed together by a plasma membrane.

There are different types of animals per se, depending on the type of environment they live in and their lifestyle. However, listed below are some of the most common types of animal cells.

What Are The Differences Between Plant and Animal Cells?

As eukaryotic cells, plants and animal cells share many features in common, including organelles like the nucleus, mitochondria, cell membrane, and others. However, as both are fundamental units of entities, each has its own feature differentiating it from the other. Here are the 17 differences in animal and plant cells: