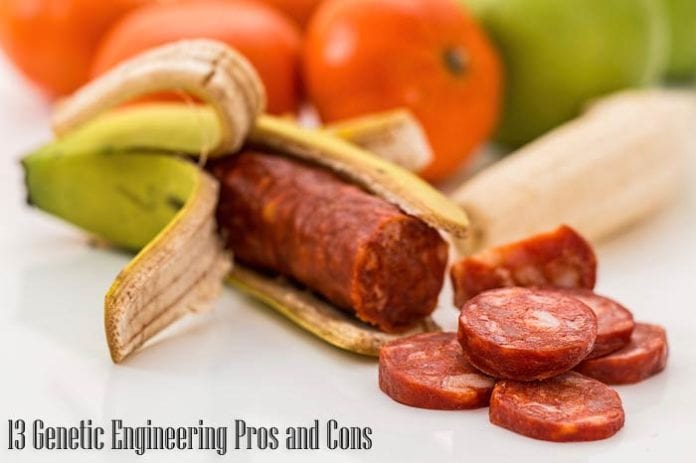 Over the last century, the field of genetics and biotechnology has greatly developed because of the better understanding of the gene. Because of the improvement of technology, scientists have already gone up until the manipulation of the genome (complete set of genes) of organisms. This process is called genetic engineering. In this article, we will explore 13 important genetic engineering pros and cons.

What Is Actually Genetic Engineering?

The “sharing” of genetic material among living organisms is known to be a natural event. This phenomenon is known to be very evident among bacteria, hence they are called “nature’s own genetic engineer”. Such phenomenon is the inspiration of scientists in this endeavor.

Genetic engineering is the process of manipulating an organism’s genome using biotechnology and the products of it are either referred to as “genetically modified” or “transgenic” organisms. Check out the disadvantages of genetically modified foods here.

How Does Genetic Engineering Work?

Basically, genetic engineering is done by inserting a “gene of interest” from sources like bacteria, viruses, plants, and animals into the “target” organism. As a result, the organism with the inserted “gene of interest” is now able to carry out the new trait or characteristic.

This technology grants us the ability to overcome barriers, exchange genes among organisms, and produce new organisms with “favorable traits”.

For a more detailed explanation of the process, check out this video below:

Now we will dive into the pros and cons of Genetic Engineering now.

A variety of food crops and products have already been modified in order to provide better nutrition for consumers. For instance, did you know that you can already have your daily requirement of vitamin A by eating rice alone? By inserting a gene that encodes for vitamin A to the gene of regular rice, scientists were able to create a new breed of rice plants called “Golden Rice“. Such discovery is very helpful to the diet of populations that consume rice.

2. Increased resistance of plants to rotting and pests

A common problem in farming and food production is the rapid infestation and rotting of crops. Using genetic engineering, scientists have already found a solution: by creating rot and pest resistant crops. By genetically engineering the gene that encodes for rotting in plants, the ability of a certain fruit to resist rotting is enhanced. In the case of pest resistance, scientists insert genes for toxin production into plants, thus resulting to them deterring their insect pests.

Animals have already been modified in order to increase meat production. One example of a genetically modified animal for such purpose is the Belgian blue cattle which originated from Belgium, as the name suggests. Unlike regular cattle, this genetically engineered cattle has an impressive muscling known as “double muscling”. By inserting a gene that inhibits the production of myostatin (the protein that suppresses muscle growth), scientists were able to produce a new breed of cattle that has humongous body size ideal for meat production.

4. Production of novel drugs and vaccines

In medicine, genetic engineering is used in order to produce various drugs like human growth hormone, insulin, and vaccines. Basically, a vaccine is a synthetic substance given in order to stimulate the production of antibodies and provide immunity against a certain disease. To do this, inactive forms of viruses or the toxins they produced are injected into the person being immunized.

5. Development of new and favorable characters

Through the course of time, genetic engineering is no longer limited to plants and animals alone. Surprisingly, a study published in the journal Nature showed that genetic engineering in humans is already being performed in a process called gene doping. Unlike the known process of “doping”, which involves the use of performance enhancing drugs like growth hormones and steroids, gene doping involves the non-therapeutic use of genes and cells to improve athletic performance.

6. Creation of humans with desirable features

In addition to the above mentioned, did you know that using genetic engineering, you can already choose the type of baby you want to have? The term “designer baby” refers to a baby whose genetic makeup has been chosen in order to ensure that a certain gene will be present or to remove a certain unwanted trait. Although possible, this genetic technology has not yet been started because of continuing ethical debates.

On the other hand, there are several types of potential health effects that could arise from the insertion of a novel gene into an organism. Critics disagree with the methods of genetic engineering because of:

1. The fear for unintended selection and any unwanted transfer of genes

In short, there is no 100% chances that the genes inserted will be expressed. In fact, they can even end up in unexpected places. Such changes can contribute to alteration in the organism’s growth, metabolism and response.

When GM crops were first introduced to the market, the possibility that they might cause allergies became the prime concern of consumers. Apparently, there have already been several studies which suggest that the genetic engineering may have increased natural allergens in crops. As alluded to earlier, the transfer of genes across organisms is prone to high probabilities of failures. For instance, the supposedly “gene of interest” is not transferred; instead, another gene for producing allergen is.

Another damaging effect of producing GM organisms is a condition called “antibiotic resistance“. In this phenomenon, the supposedly target organisms of antibiotics change in a way that they eventually become resistant to the drug. As a result, they will continue to survive, causing greater harm.

5. The fear for the rise of “invasive species”

In relation to the above point, the increase in the production of GM crops and animals may lead to the rise of invasive species. Because GM organisms are often better adapted to the environments that they were modified for, they out-compete naturally occurring plants and animals. In science, such organisms are termed as “invasive species”. They are basically organisms with uncontrollable growth of populations up to a degree that already harms organisms and the environment.

Because of the technology used to create genetically modified crops and animals, private companies that produce them do not share their products at a reasonable cost with the public.

For critics, genetic engineering has no resemblance to the natural process of breeding. This is because in the process, a different gene is forced to combine to the genes of an organism.

In addition, they believe that the process is somewhat disrupting the natural way and complexity of life. In addition to this, critics fear the misuse and abuse of biotechnology.

Indeed, genetic engineering will always have two opposite sides. While the possibilities of what science can create are endless, and the harmful effects also are. At present, it is important to know that the real risks and benefits of genetic engineering lie in how science is interpreted and used.

But there’s really no doubt that with the rapid advancements in technology, the creation of GM organisms are also increasing.

What do you think? Are GM organisms slowly becoming the future?