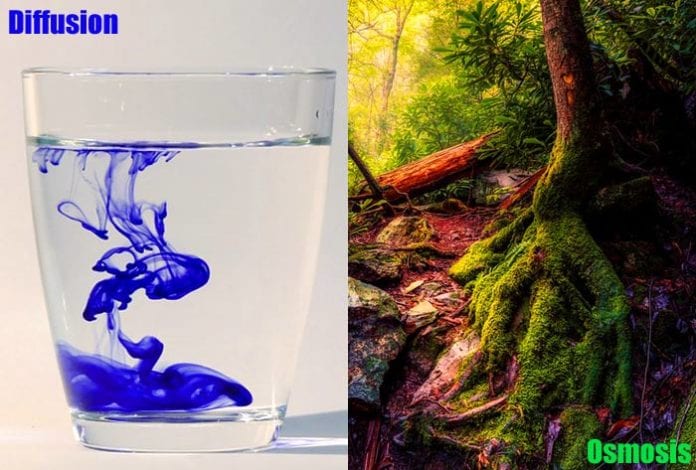 Biological membranes are known to serve as the physical barrier between the intracellular environment of living organisms and their outside world. While they have to be impermeable at some point, to disallow some substances to enter; obviously, they have to be permeable to some essential substances and nutrients in order to allow them to enter and leave the cell.

Also called as passive transport, diffusion is a type of transport process that allows small lipid-soluble (lipophilic) molecules to enter and leave the cell easily. This becomes possible because usually, the cellular membranes of living organisms are held by weak forces that allow these molecules to travel from the inside to the outside, and vice versa.

Apparently, there are two types of diffusion: passive and facilitated.

Why is it Important?

Diffusion affects almost every aspect of biology, making it one of the most important life processes in organisms. Living organisms use diffusion to facilitate transport of substances within short distances. Aside from that, this process is very sustainable since no energy is required for it to happen.

In living organisms, the process of diffusion is quite widespread and happens in almost all cells. The following are some of these examples:

There are many diffusion processes occurring in plants, one of which is during gas exchange. Plants utilize diffusion to facilitate the entry of carbon dioxide into the leaves for photosynthesis.

Diffusion, too, occurs in animal cells in several ways–either to facilitate the entry of molecules into the cells or the exit of wastes out of them.


The main force regulating such process is called the osmotic pressure. Osmotic pressure is needed to stop the flow of water across a membrane in order to separate the solutions with varying concentrations.

Check out the Osmosis simulation here.

Why is it Important?

Just like diffusion, osmosis is highly important in living organisms as it facilitates the distribution of needed compounds as well as the exit of waste products out of cells. Without this process to regulate everything, substances essential for life will just simply enter or leave cells aimlessly, leading to potential biological failure.

The process of osmosis is very essential for vascular plants and it is perhaps one of the main drivers for their evolution to land.

For instance, in humans, one way is the process of concentrating the urine. This will be initiated by the movement of water from the blood filtrate resulting to the formation of urine across the epithelial cell layer in the tubules (in the kidney) and ultimately into the blood.

Main Difference Between Diffusion and Osmosis

To have detailed illustration, you may want to view this video:

Now after learning about their unique properties, can you now easily differentiate the two?