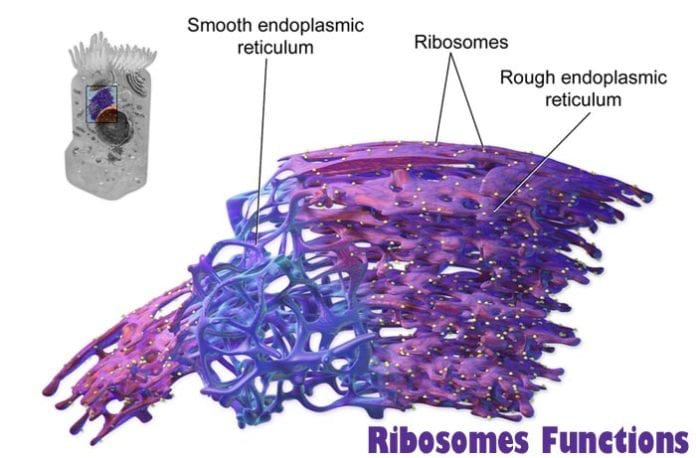 Ribosomes Function: Tracing its origin to more than 3 to 4 billion years ago, ribosomes are thought to have risen from the world of the ribonucleic acid (RNA). Initially, they were believed to have self-replicating mechanisms that eventually evolved to the synthesis of their own proteins after the appearance of the amino acids.

Interestingly, these evolutionary changes that occurred in the ribosomes have remained embedded in their biochemistry and still exhibited in their structures and functions. The ribosome was first discovered after subjecting the rat liver homogenates to differential ultracentrifugation.

Since this discovery, the ribosome continued to become one of the pillars where the basis of human knowledge about cellular structures and functions at the biological and molecular level has been constructed.

However, what exactly is a ribosome? In this post, we will explore more about this fantastic “protein machinery” as we uncover below ribosomes function, its structures, and variations in prokaryotes and eukaryotes. Let’s take a closer look. 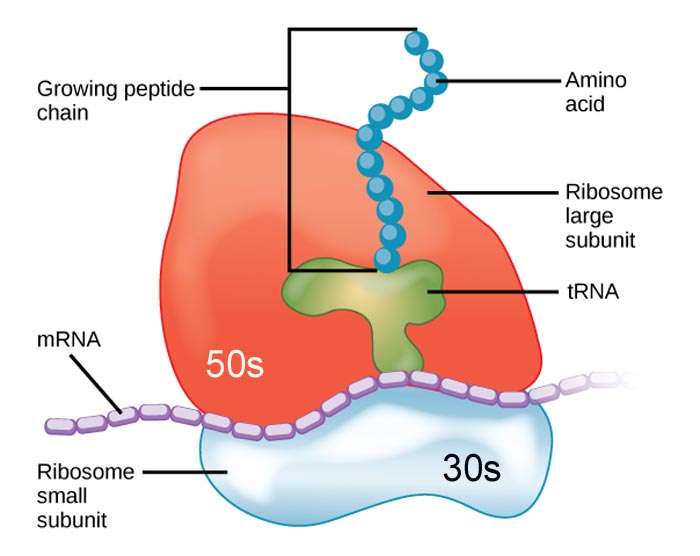 By definition, ribosomes refer to the highly-conserved macromolecular structures that are important for the synthesis of proteins in all domains of life. In other words, ribosomes are responsible for the translation of the mRNA (messenger RNA) into proteins.

Contrary to popular belief, ribosomes are not and cannot be classified as cellular organelles because of the absence of an enclosed double membrane.
Moreover, instead of a cellular membrane, ribosomes are merely macromolecules that are composed of proteins and RNA.

The modern structure of the ribosome is not precisely chiral, and studies show that the primeval prokaryotic and eukaryotic ribosomes could have had less chiral specificity. This is extremely possible despite the lack of RNA components with distinct chiral properties and specific editing mechanisms.

Various studies suggest that the first peptides synthesized by early ribosomes could be composed of d-amino acids; thus, made them somewhat irregular.

Protein synthesis is a primary biological mechanism that is essential in all living organisms. Prokaryotic ribosomes, unlike eukaryotic ones, do not have distinct outer membranes. In this case, the ribosomes of prokaryotic organisms naturally float in the cell’s cytoplasm.

Interestingly, the knowledge about the translation mechanism of protein is prokaryotic organisms is vital in the study of antibiotic resistance. Some microorganisms can effectively resist or work against a drug by simply inhibiting the ability of ribosomes to synthesize proteins.

Generally, the mechanism of the eukaryotic protein synthesis is quite similar to that of the prokaryotic protein synthesis. However, there are quite some differences between the two. Regarding location, eukaryotic ribosomes are located in the exterior of the rough endoplasmic reticulum (RER). However, they can also be found in other places like in the mitochondria, chloroplasts, or may float freely in the cytoplasm.

In eukaryotic organisms, ribosomes are made in the nucleolus, a part of the nucleus of the cell, and in the cytoplasm. The process is more complicated as the mere assembly involves more than 200 proteins.

As alluded to earlier, ribosomes are complex yet highly sophisticated cell machinery essential in the synthesis of proteins. Nearly all proteins needed by prokaryotic and eukaryotic organisms are synthesized by the ribosomes. More specifically, the ribosomes function to perform the following roles.

1. Translation of information from the nucleus

Formed by two subunits joined together, a ribosome is used to translate the encoded information carried by the mRNA (messenger RNA) from the nucleus. Interestingly, numerous ribosomes can attach to a single strand of mRNA (such structure is known as a polysome). After a successful synthesis of a polypeptide chain, the two previously joint subunits separate. In the future, they may be either used again together or simply never join forever.

With the use of the tRNA (transfer RNA), the ribosome joins together the amino acids that were gathered from the cytoplasm. Ribosomes can astonishingly link more than 200 amino acids per minute. With such rate, small-sized proteins can be formed easily. However, larger proteins would need at least two to 3 hours to be completed. An example of this would be the muscle protein titin which is composed of more than 30,000 amino acids.

3. Transmission of the polypeptide chain

After the formation of a functional polypeptide chain, the protein product will now fold to create a three-dimensional working structure (however, some proteins may have started folding into this form even during the start of the synthesis). After this, the ribosome will now export it to the cytoplasm.

The importance of ribosomes lies mainly on their ability to synthesize functional proteins. Ribosomes primarily work with the genetic material DNA (or RNA in some cases) to perform this function. The genetic material, which is not only crucial for one’s identity, acts as the “blueprint” from where the process of protein synthesis is based upon.

For the last decades, the scientific community has witnessed the increase of the discoveries about the different structures and functions of the prokaryotic and eukaryotic ribosomes.

These works reflect the continuing search for the structure-function principles in ribosomes.

Given the continuously growing knowledge in this field, it is not difficult to think that many of these functions will eventually be understood in detail in the near future.

The elucidation of this information will contribute to greater knowledge about Cellular Biology, Physiology, developmental biology, as well as the management of diseases.