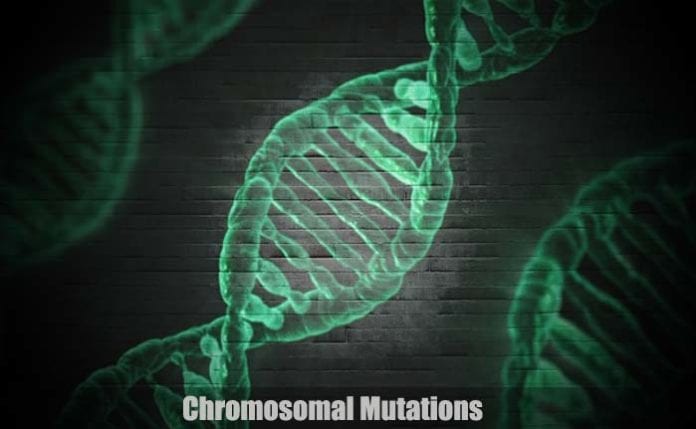 Chromosomal Mutations: In living organisms, mutations occur at a rate of one per every ten million cell replications. And as compared to the more than 100 trillion cells in the human body, this number is rather insignificant.

Chromosomes are thread-like structures where the genetic material DNA is packaged. They are located in the nucleus of cells and undergo condensation before cell division. Like any other processes, the chromosome may encounter random genetic changes or be affected by it.

On this page, we explored what happens when a chromosome encounters such changes in its structure, number, and type.

What is a Chromosomal Mutation?

By definition, a chromosomal mutation is any change or error that occurs within the chromosome. Such errors can be attributed to any mistakes or problems that occur during cell processes like mitosis and meiosis.

This kind of chromosomal mutation usually occurs during any errors in cell division. This happens when homologous chromosomes paired up, genes in chromosomes broke apart, genes inserted in the wrong chromosome, or genes or set of genes are completely lost in the chromosome.

Basically, structural chromosomal mutations are classified into four: deletion, duplication, inversion, and translocation (or shift places). They are illustrated below: 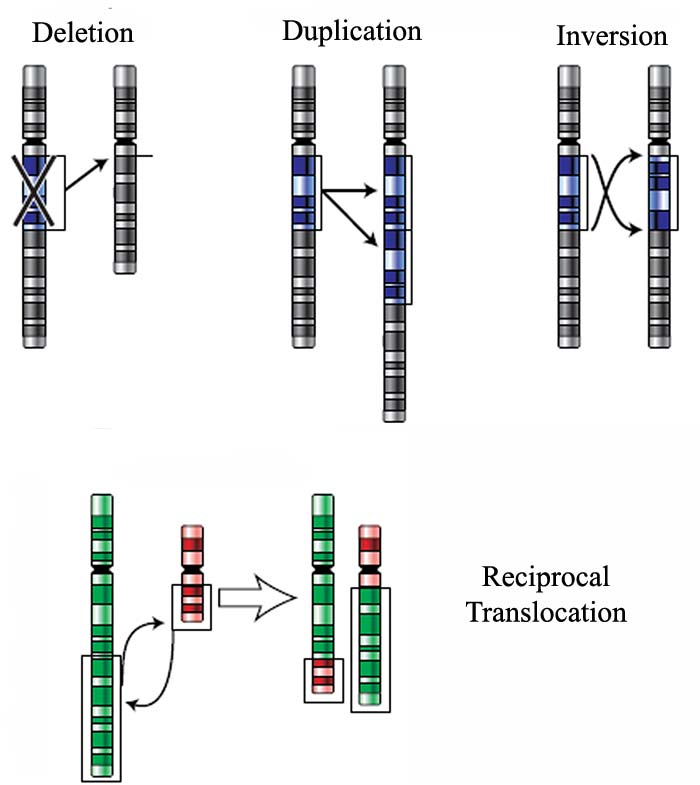 This type of mutation occurs when a part of the DNA is not duplicated or is lost during DNA replication. The size of this region can either be a mere nucleotide or can be large as an entire chromosome.

Disorders Due To Deletion

This type of mutation occurs when an extra copy of a region (or regions) in the DNA is produced. This duplicated region can either be located in its normal location in the chromosome or sometimes be located in other parts of the chromosomes or even in another chromosome.

Disorders Due To Duplication

Common disorder due to duplication mutation in humans is: Charcot-Marie-Tooth disease type I.

During inversion, a portion in the chromosome is reversed and gets inserted back into the chromosome. Basically, two types of inversion exist: pericentric and paracentric.

Disorders Due To Inversion

Common disorder due to inversion mutation in humans is: Amniocentensis during pregnancy.

Translocation happens when a fragmented chromosome tends to join with a nonhomologous chromosome. This newly-formed segment then detaches from the chromosome and moves to a new position on another chromosome.

Disorders Due To Translocation

Common disorders due to translocation mutation in humans are: XX male syndrome, Down syndrome, Infertility and Cancer.

Aneuploidy is a type of mutation in the chromosome number wherein the ploidy (chromosome number) of the new individual is different from its wild type. This is typically a result of the nondisjunction of chromosomes during mitosis or meiosis, hence producing offspring with either extra or lost chromosomes.

The Advantages of Chromosomal Mutations

Believe it or not, the random errors that occur during cell division can be beneficial for organisms. Listed below are some of them.

Mutations are very essential for populations because they help some individuals of the population to adapt to their environment while they maintain their survival. They are also an important force in evolution because they balance out the frequency of alleles present in the population.

Mutations in the chromosomes is highly connected to diversity (not only genetically but also physically) of living organisms. Ultimately, the close interactions between inherited mutations and environmental pressures generate diversity among species.

The Disadvantages of Chromosomal Mutations

Some mutations can be quite detrimental as well. The following are the some of the most common disadvantages of mutations in the chromosomes:

Aside from inheritable disorder, certain mutations in the chromosomes can also bring about the onset of other diseases like cancer (i.e. lung, breast, and bladder.).

No matter what we do, the random changes in our genome are highly inevitable. And in this case, does the saying “the only constant is change” prove true?