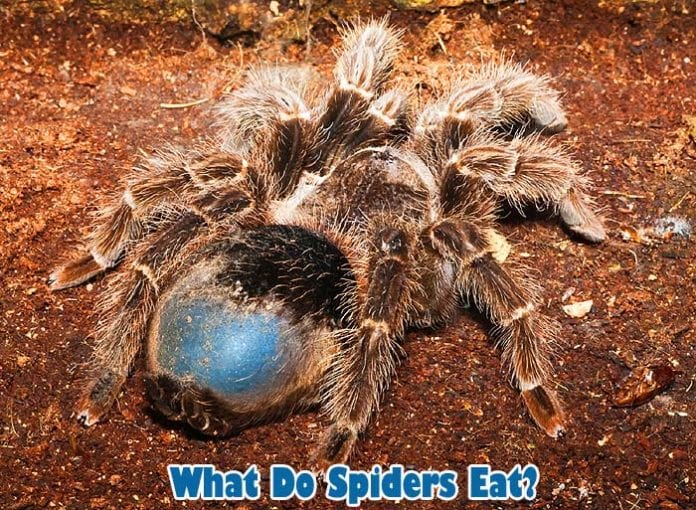 What Do Spiders Eat? Spiders are arthropods, classified in class Arachnida. These eight-legged creatures form the most significant portion of the Arachnid family.

Spiders are predatory arthropods, meaning they draw their nutrients from eating meat. They eat other spiders, small animals, and insects such as beetles, cicadas, crickets, and grasshoppers.

What Do Spiders Eat?

These suborders are further categorized as infraorders Mygalomorphae (constitutes “ancient spiders“), and Araneomorphae (contains “modern spiders“). This section will look at examples of spiders drawn from families categorized in the above infraorders.

The habitats of these spiders will also be studied in this section.

What Do Australian Tarantulas Eat?

What Do Red-headed Mouse Spiders Eat?

The Red-headed mouse spider preys on other spiders, a vast range of insect species, and occasionally on lizards, and frogs.

What Do Long Jawed Spiders Eat?

Long-jawed spiders eat moths, flies, and other kinds of insects. They tend to build their webs strategically, next to their food source.

What Do Yellow Sac Spiders Eat?

Yellow sac spiders dine on a vast range of arthropods, other spiders, and their own eggs.

Suggested Reading: Speaking of medically dangerous, check out the most poisonous caterpillars of the world.

How Do Spiders Hunt?

When Do Spiders Eat?

Most spiders are nocturnal, and they will be found foraging for food and eating during nightfall. During the day, they hide in cracks, crevices, or their webs.

How Often Do Spiders Eat?

Spiders do not eat as often.

Spiders are considered to be a perfect delicacy to monkeys, sparrows, orioles, birds, Salamanders, wasps, young frogs, toads, small reptiles such as snakes, and other spiders.

Where Do Spiders Fit in the Animal Food Chain?

Spiders play a significant role in the animal food chain.