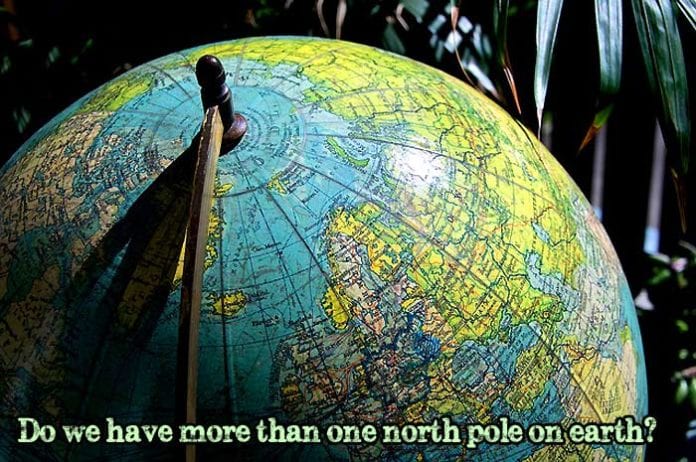 To answer this straight, yes, we have more than one North pole. But how could this happen, you say? Apparently, there are three types (or more) North pole: the “true North“, the instantaneous North pole, and the Magnetic North pole. Find out more these “norths” below.

The first North pole is the “Geographic North pole” or the “True North” that lies in the Arctic Ocean. This location represents the intersection of the man-made lines of longitude (known as meridians). Each line starts and ends at the poles of the Earth and hence depicts direct north and south travel of direction.

The next North Pole is known as the “Instantaneous North pole” that is found where the rotational axis of the Earth meets the surface and the Celestial North Pole, the point where all the heavenly bodies of the North Hemisphere can be seen.

Our planet is one huge magnet. With that said, it would be easier to understand the next north pole, the Magnetic North pole. The Magnetic North pole is located somewhere in Northern Canada (Ellesmere Island) which is the point of entry for northern lines of attraction.

To feed your childhood dreams, yes, there is actually a town in Alaska that is known as the “North Pole“. Unlike the aforementioned North poles, this “North” is simply a town that is located in the Northern part of the planet. But yes, this place receives a lot of letters for Santa Claus.

In this article, you have learned that there is not only one North pole present. Therefore, one should always be clear when talking about and specifying where this “North pole” is.

But next time somewhat asks you where the “North pole” is, maybe it is best to ask back “Which North pole?” What do you think?