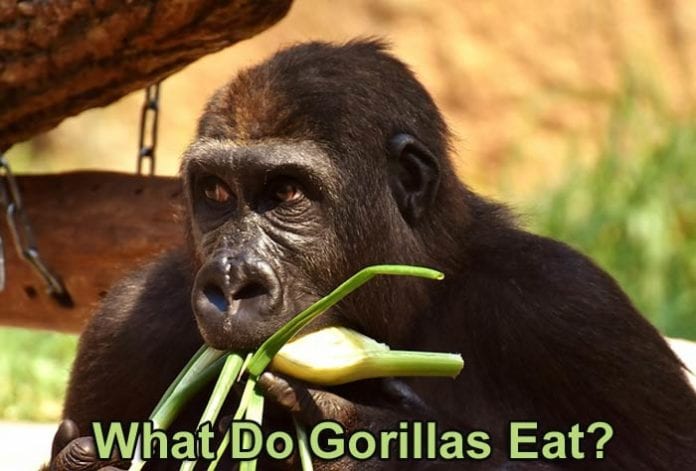 What Do Gorillas Eat?: Did you know gorillas are the biggest living primates on earth? Although IUCN declared all species of gorillas as critically-endangered, they live mostly in tropical forests in Africa. They live on land rather than in trees, unlike rainforest monkeys. By nature, gorillas are omnivorous.

According to biological DNA analysis, it is determined that about 99% of gorillas’ DNA (gene makeup) is identical to humans. So we can confidently say that gorillas are our closest living relatives, followed by chimpanzees, orangutans, and bonobos. Humans are sometimes called “the fifth great ape“.

Since these mammals occupy the forest floor layer of the tropical or subtropical rainforests, what do gorillas eat? Are gorillas herbivores? What is the gorilla diet? Do gorillas ever eat meat? Do gorillas hunt other animals? What are the sub-species of gorillas and their eating patterns? Most importantly, do gorillas attack and eat humans?

On this page, let’s explore the answers to all these gorilla diet questions with images. Also, we will explore the gorilla food chain diagrams and silverback gorilla foods. Without much further ado, let’s investigate what gorillas eat now!

What Do Gorillas Eat? 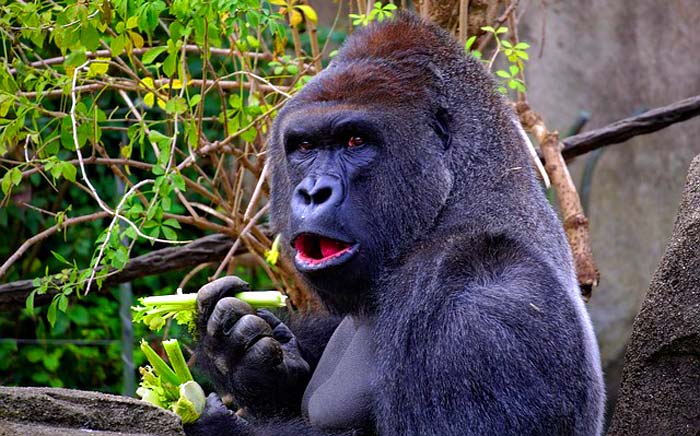 The term “Gorilla” refers to a genus of animals including many different species. By nature, gorillas are omnivorous, meaning that they eat both plants and animals. There are mainly two types of gorillas, namely western gorilla and eastern gorilla, which we will explore more on their sub-species later in the article. 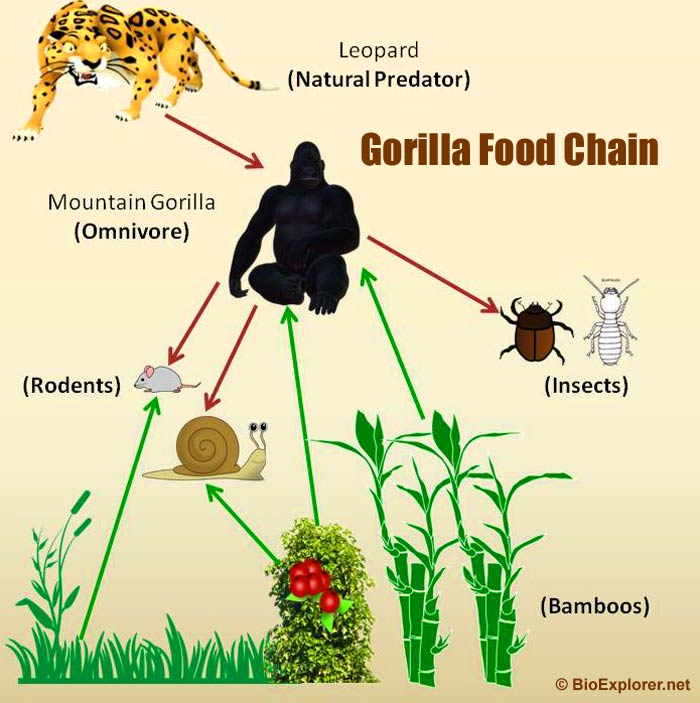 In the ecological pyramid, gorillas come under the secondary consumer bracket. Their natural direct predator is leopard in the wild however due to deforestation and loss of habitats, their next immediate threats are humans from illegal poaching and hunting.

How Much Do Gorillas Eat? 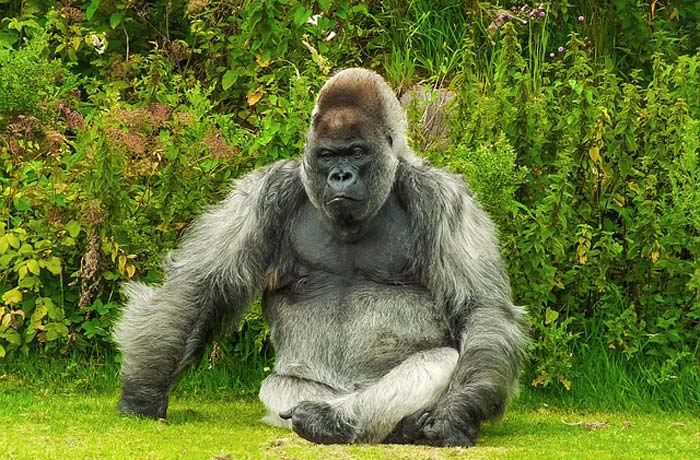 According to THE B&RD organization, the average adult male gorilla (weighs about 200 kg or 400 lbs) eats about 30 kilograms of vegetation every day whereas the female gorilla consumes about 18 kgs of plants. Unlike humans, gorillas have strong chewing muscles and a healthy set of teeth (including long pointed canines), which help them to digest these mass plant materials efficiently. Note that the male gorillas use canines mostly in fights with another male. 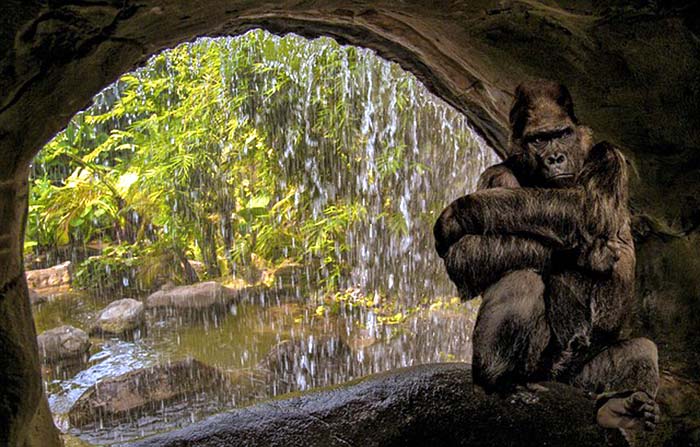 According to SeaWorld Parks & Entertainment, Gorillas rarely drink water as they consume fleshy and juicy plant materials every day which is composed of 50% water contents anyway!

Gorillas do not kill large animals. Overall in their food composition, it is estimated that gorillas’ diet includes 0.1% of animal matter, and the rest is all plants.

How Often Do Gorillas Eat? 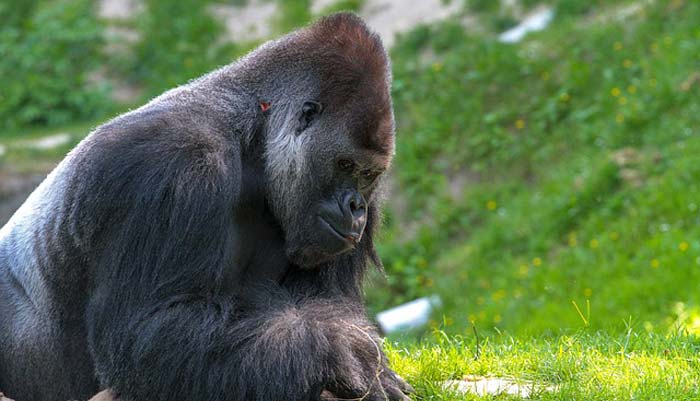 Gorillas spend 50% of their day eating and foraging. These beasts look for food in the morning and the afternoon. Gorillas travel over 1100 meters a day looking for food!

Like any other wild animals, gorillas are very shy and would stay away or avoid humans entirely if possible in the wild. However, if an intruder comes too close to the gorilla’s family, the leader silverback gorillas could react aggressively but only to drive them away. In general, gorillas never attack humans unless humans provoke them intentionally.

There are instances in history where gorillas attacked humans in conflicts due to their territory breaching, however, not to hunt humans for food.

In general, the gorilla will see you as harmless and would stay calm unless threatened with direct eye contact & rumors.

Here is a recent instance where gorilla named Harambe in Cincinnati Zoo caught the national attention. A three-year-old fell into the gorilla enclosure, and Harambe dragged the boy through the water to a safe place to protect the boy against the shouting mob.

Based on the past violent behavior of gorillas, the zookeeper shot Harambe rather than tranquilizing him to save the child.

Believe it or not, occasionally, gorillas consume mud, soil, or even ash (near volcanos) to regulate their digestion system and absorb any minerals missing in plants. Also, dirt helps them to neutralize the poisonous substances from plants they feed on. This process of eating soil or clay or ash is known as geophagy.

Does Gorilla Eat Other Gorillas?

The short answer is perhaps. In the recent PLOS journal 2010, there was a recording of finding other monkey and antelope meat in western lowland Gorillas’ fecal samples. Cannibalism is quite common in Chimpanzees than gorillas. Adult chimpanzees can snatch the infant chimpanzees from their mothers and eat their fleshes.

However, there was no documented evidence of eating other adult chimpanzees. 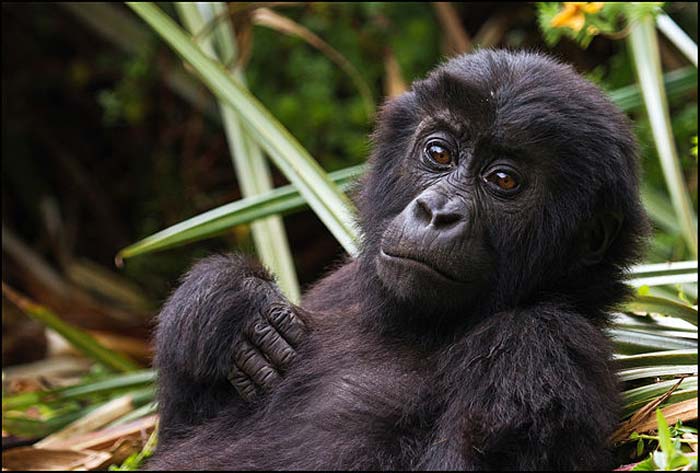 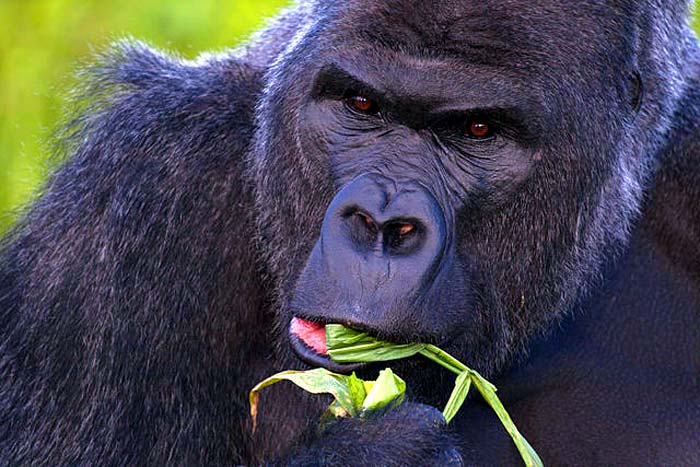 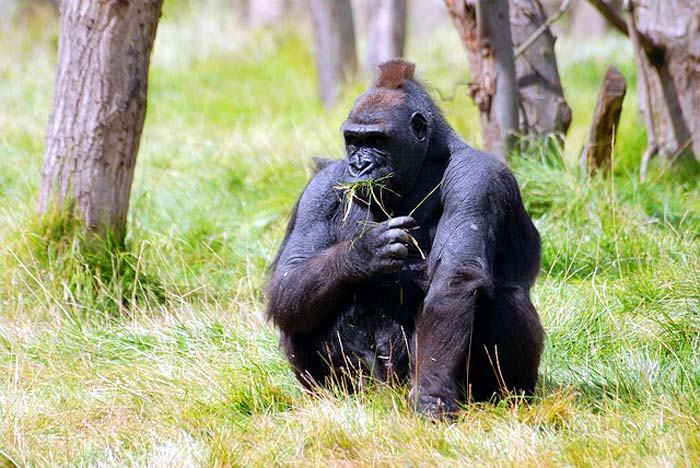 As mountain gorillas in the thick forests of central and west Africa, they also eat roots, bamboo shoots, fruits such as berries, wild celery, tree barks, pulp, and occasionally insects and termites. 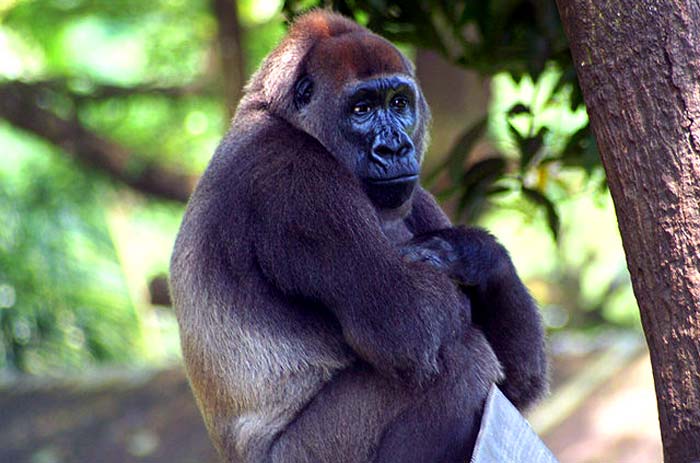