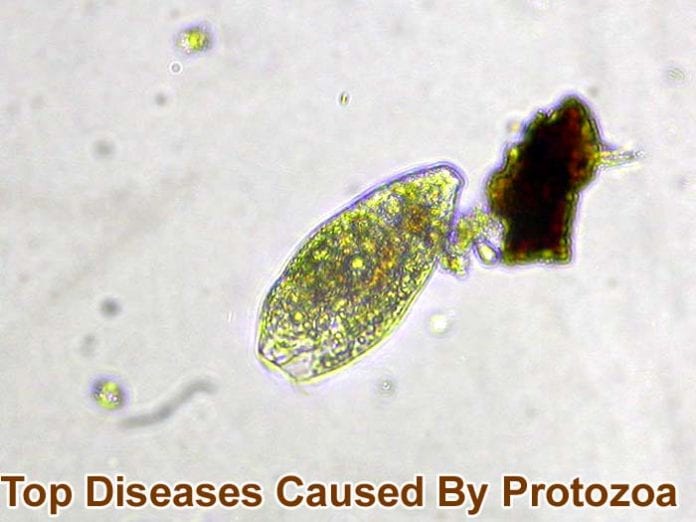 Diseases Caused By Protozoa: Literally meaning “first animals“, protozoans are considered to be one of the very first organisms to thrive in the planet. Basically, they are multicellular organisms and have membrane-bound organelles that work independently from the whole cell.

Most of the time, protozoans are microscopic, and only a few of them grow big enough to be seen by the naked eye.

Because of their minute sizes, protozoans can easily enter the human body, making them a good candidate for parasitic organisms. While some protozoans are harmless, some can cause disease that ranges from benign to severe.

Below are the top 12 most common diseases caused by protozoans. 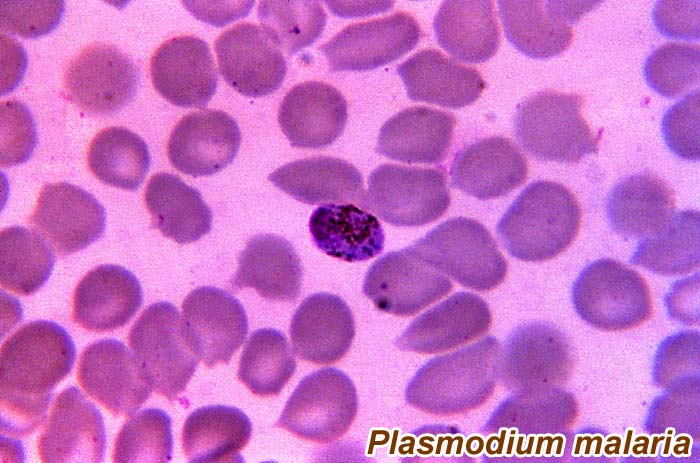 Cause: Genus Plasmodium (In humans, malaria is brought about by four different species of the organism: Plasmodium malaria, Plasmodium falciparum, Plasmodium vivax, and Plasmodium ovale).

Vector: The parasite is only carried by the female Anopheles mosquito. Usually, it bites during dusk and dawn.

Nature: Malaria is an illness that needs an incubation period of more than 7 days. Hence, if the illness developed in less than a week after exposure, it is safe to say that it is not malaria.

Symptoms: Among all types of malaria, the most severe is the one that is caused by the species Plasmodium falciparum. Some of the most common symptoms include fever, headache, muscle pain, vomiting, abdominal pain, and cough. In worse cases, organ failure, convulsions, and the collapse of the circulatory system may occur. 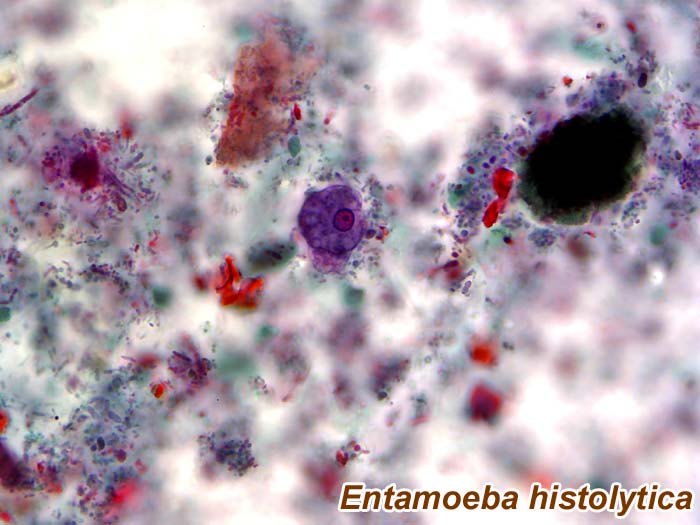 Cause: Amoebas of the Entamoeba genus. The parasite Entamoeba histolytica is the most common.

Nature: Also known as amoebic dysentery, amoebiasis is a type of gastrointestinal infection that is often linked to poor sanitation and socioeconomic status rather than the weather or climate.

Symptoms: Most of the time, amoebiasis starts with abdominal pain that eventually develops into loose bowel movements. Aside from that, fever, nausea, loss of appetite and bloody stools are also an indication of amoebiasis.

Treatment: To treat amoebiasis, most doctors prescribe metronidazole or tinidazole. 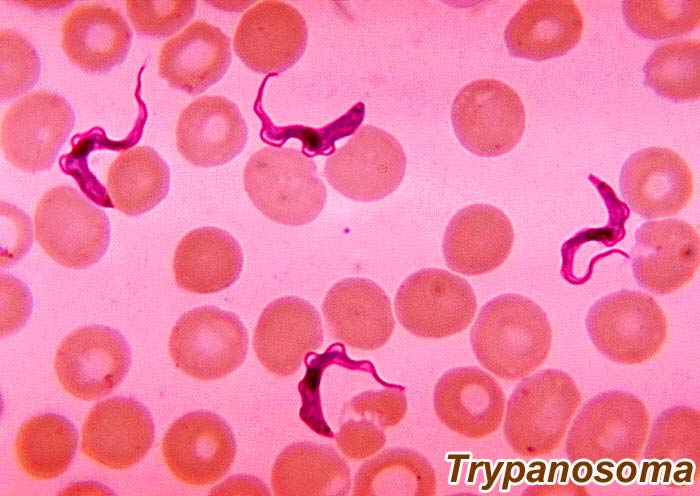 Symptoms: Some of the most common symptoms of the disease include a headache, high fever, irritability, muscle and joint pain, and swollen lymph nodes. In worse cases, some people get skin rash and develop neurological problems. If left untreated, the infected patient may die within a few months.

Treatment: While the type of treatment differs depending on the type of trypanosomiasis infection, the most common medicine recommended during its early stages are pentamidine, suramin, nifurtimox, eflornithine, and melarsoprol. 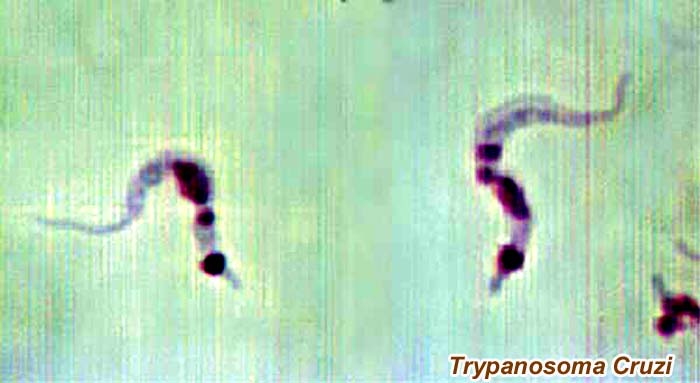 Cause: The disease is caused by the parasite Trypanosoma cruzi. It was named after its discoverer, Brazilian physician, and researcher, Carlos Chagas (1909).

Vector: This parasite is acquired by humans when they get in contact with the urine or feces of bugs known as reduviid bugs (also called as triatomine bugs or “kissing bugs“). The disease is not transmitted from person to person.

Symptoms: The most common symptoms of the disease are swelling/redness at the infection site (called as chagoma), fever, swollen lymph nodes, headache, body pain, nausea, diarrhea, and extreme fatigue.

Treatment: The disease is highly treatable if treatment is made possible as the patient gets infected. Usually, Chagas disease is treated with benznidazole and nifurtimox. Some Alternatively, the patient can still undergo antiparasitic treatment during disease progression. 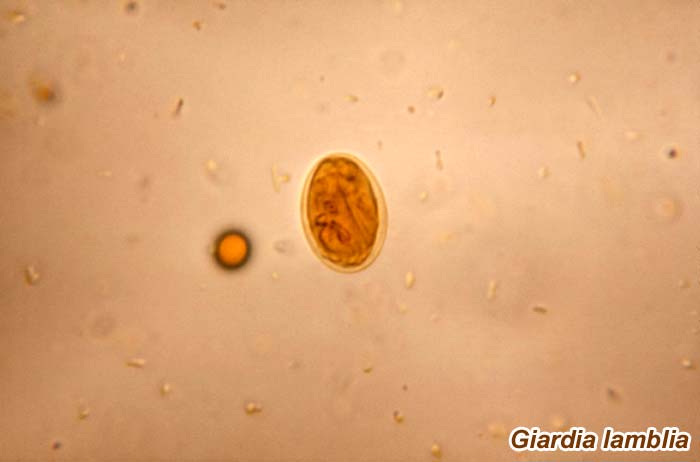 Cause: The disease is caused by the parasite Giardia lamblia, a parasite of the duodenum part of the small intestine.

Symptoms: The disease is often manifested by watery and foul-smelling diarrhea, frequent flatulence, extreme fatigue, nausea, and significant weight loss. Interestingly, some people may have the parasite in their small intestine but may never manifest the symptom at all.

Treatment: The most common antibiotics used to treat lambliasis are metronidazole and tinidazole. 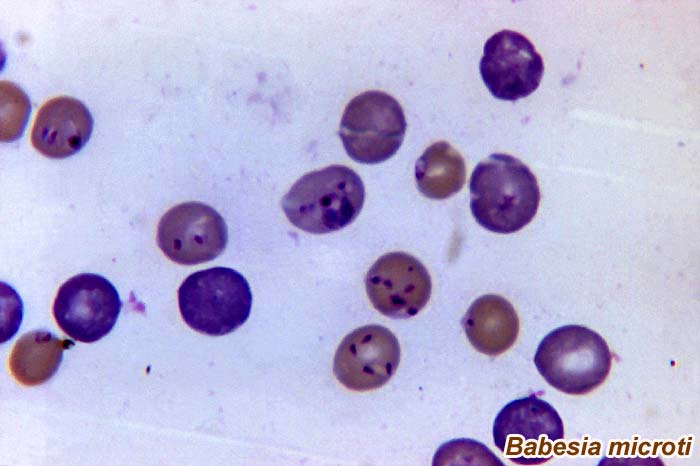 Cause: The disease is caused by the microscopic red blood cell-infecting parasite Babesia microti.

Vector: The protozoan is transmitted through the bite of the infected tick Ixodes scapularis. Most of the time, it is transmitted when the said tick is in the nymph stage.

Symptoms: Most of the time, people infected with the protozoan do not exhibit any noticeable symptoms. In some cases, they develop fever, headache, fatigue, body pain, nausea, and loss of appetite. Babesiosis can be sometimes life-threatening especially for some people who have weak immune systems.

Treatment: Patients with babesiosis can be treated within 7 to 10 days, with a combination of prescription drugs. Such combinations may be clindamycin and quinine, or azithromycin and atovaquone. 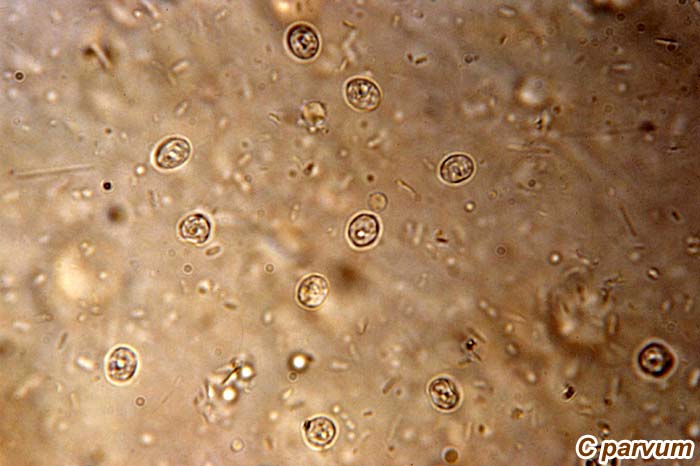 Cause: In humans, the disease is caused by the apicomplexan protozoan members of the genus Cryptosporidium. The most common species found in humans are C.parvum and C.hominis.

Vector: Unlike other parasites, Cryptosporidium species do not need a vector and have the ability to complete their life cycle on their own.

Symptoms: In humans, the disease is characterized by the infection of the small intestine, particularly the jejunum and the ileum. As a result, an infected patient experiences watery diarrhea that could last up to two weeks. In severe cases, the infection could reach the stomach and the lungs.

Treatment: At present, there is still no prescribed medication for the disease. Most of the time, the recovery period is dependent on the immunity of the patient. Usually, it takes about two weeks to recover without medication. 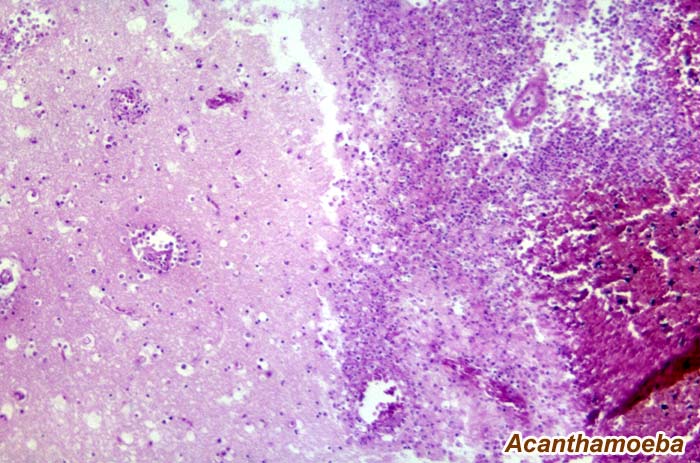 Vector: The protozoan does not require a vector to be transmitted to humans.

Symptoms: Infection of the parasite is usually manifested by the following symptoms: a headache, nausea, blurred vision, light sensitivity, and frequent loss of consciousness. The infection can be further confirmed by the presence of a tumor-like mass in the brain.

Treatment: Infection from the said parasite is usually treated with drugs such as azithromycin, flucytosine, itraconazole, and pentamidine. Ultimately, a surgery to remove the mass of tumor can be performed. 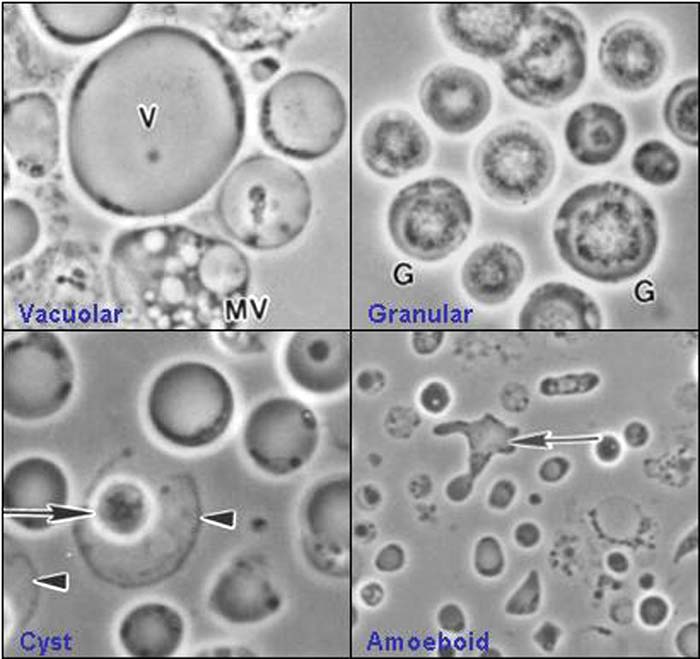 Cause: The disease is caused by the water-borne protozoan Blastocystis hominis.

Vector: None. While its mode of transmission remains unknown, the number of infected people increases in areas with poor hygiene and sanitation.

Symptoms: Blastocystosis is often asymptomatic; it could occur without showing any symptoms. This is because of the way the parasite attacks the body and creates more trouble when the immunity is weakened. However, if you are experiencing severe diarrhea, nausea, flatulence, and fatigue, it might be good to have yourself checked for the parasite.

Treatment: The disease is very hard to treat because of the ability of the parasite to attach itself to the intestinal mucus. Nevertheless, antibiotics such as tinidazole and metronidazole, and antiprotozoal drugs like paromomycin can be used. 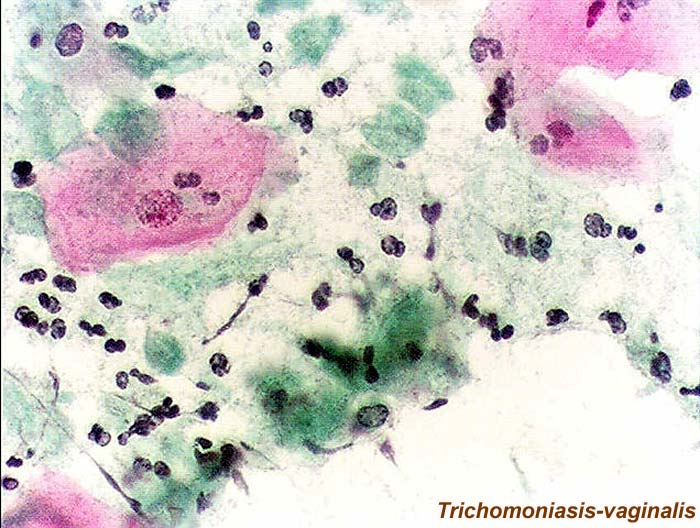 Symptoms: Most of the time, trichomoniasis occurs with no noticeable symptoms. Both men and women with the disease may experience itching and burning sensation in the affected areas, as well as having weird discharge.

Treatment: Regarding treatments available, this disease is considered to be one of the most treatable diseases in the United States. 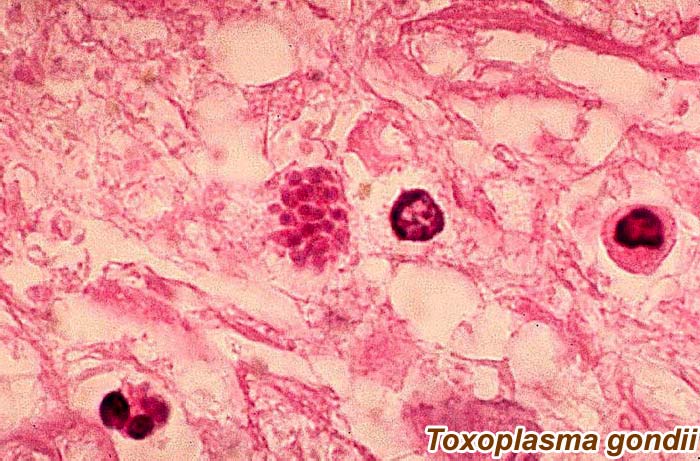 Cause: Toxoplasmosis is a type of infection from one of the world’s most common protozoan Toxoplasma gondii.

Symptoms: People infected with the disease may develop flu-like symptoms, and experience blurred vision and redness of the eyes. Aside from that, infected people may also experience body pain and fatigue.

Treatment: Some of the most common prescription drugs for the disease include pyrimethamine (Daraprim) and the antibiotic sulfadiazine. 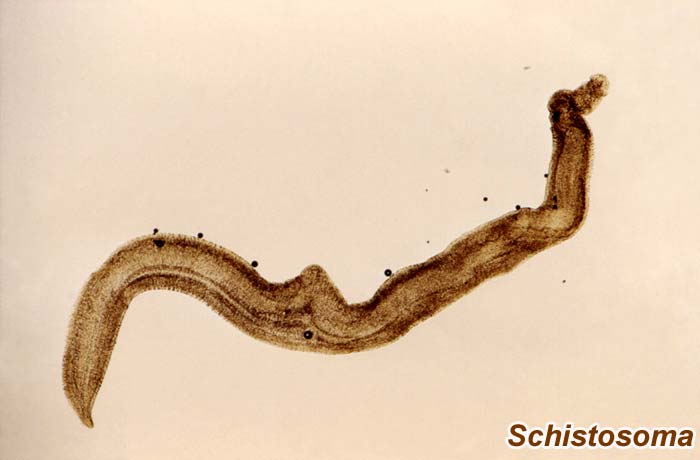 Cause: The disease is caused by the blood flukes of the Schistosoma genus.

Vector: None. However, the parasites are transmitted in their larval forms when they are released by their vector – freshwater snails. After that, they can get into the skin after contact with contaminated water.

Symptoms: The most common symptoms associated with Schistosomiasis include blood stool, frequent diarrhea, and severe abdominal pain. In worse cases, enlargement of the liver may occur. All of these symptoms are a result of the body’s adaptation to the eggs of the parasite.

Treatment: The drug praziquantel is the most prescribed treatment for all types of the disease. It is safe, affordable, and very effective. Repeated treatments in some patients are also advised.