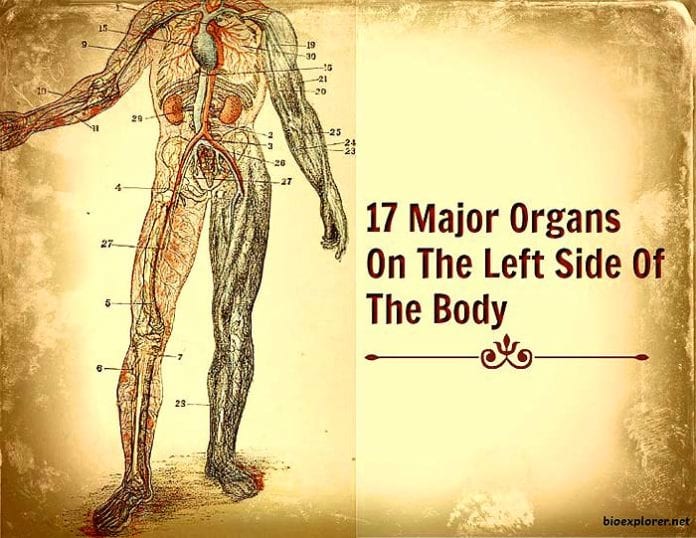 Organs on left side of body: The human body is known to display symmetry. When you divide the body into two, each side would be the exact copy of the other. While this is true in the case of the external human body, the organization of the internal organs is different.

The bone structure, as well as the shape and distribution of the organs inside, are different.

Many organs are located in or close to the central plane; however, some organs are either paired (have left and right sides) or are exclusively located on one side.

What organs are on the left side? In this article, discover the 17 major organs on the left side of the body and learn how they function with their paired organ and with other parts of the whole.

Let’s explore with a closer look.

Organs On The Left Side Of The Body

Here are the major organs on the left side of the body:

1. Left Hemisphere of the Brain

In humans, as well as other animals, the brain is considered to be the most complex organ. The brain is divided into two halves known as hemispheres.

The eyes are one of the many paired organs in the body. Considered to be the windows to the soul, the eyes function for the capture and focus of light into sensory receptors.

The ears are one of the body’s most advanced and sensitive organs.

The anterior nares are the external openings of the nose (or nostrils) into the nasal cavity.

Another paired organ in this list is the breasts located at the chest. Males and females have glandular tissues in their breasts; however, they are far more developed in females.

Also one of the paired organs in this list, the lungs are sponge-like and butterfly-shaped organs that facilitate the respiration process.

To be specific, the heart is not correctly located on the left side of the body. Instead, it is found in the body’s midline (in the thoracic cavity, just above the diaphragm).

The human skeleton, composed of bones, functions as the body’s internal framework. In general, there are 270 bones present at birth, but they gradually decrease to 206 by adulthood, as some of them become fused structures.

Located above the stomach and in the upper left portion of the stomach, the spleen is considered to be the largest organ in the lymphatic system.

Located behind the upper left abdomen and just behind the stomach, the pancreas is a flat, pear-shaped organ with two primary functions: endocrine and exocrine.

Located on the upper left side of the abdomen, the stomach is one of the most critical organs during digestion.

The kidneys are bean-shaped organs on both sides of the spine, below the ribcage, and at the back of the abdomen.

Located on top of each kidney, the adrenal glands are triangular organs that are 1.5 inches to 3 inches long (ad-near & renes-kidneys).

Another paired organs in this list are the ureters which are located on the abdomen (upper half) and the pelvic area (lower half).

The ovaries are known to be a pair of almond-shaped organs that are one of the most important parts of the female reproductive system.

Also known as testicles, the testis (plural: testes) is one of the two oval-shaped organs of the male reproductive system.

Considered to be the final portion of the gastrointestinal tract, the large intestine is the organ that is responsible for the absorption of water, minerals, and vitamins, while, at the same time, converting food into fecal matter.

According to anatomical studies, our genetic makeup is what determines the side on which side of the body should the organs be located. Interestingly, about 0.01% of the world’s population is characterized by the condition known as Situs Inversus.

People born with the said congenital condition have abnormal positioning of visceral organs. In other words, their visceral organs are located on the opposite side of the body.

Now that you have known the organs on the left side of the body, can you guess which are located on the right? 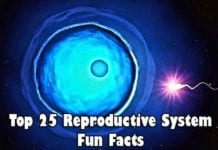