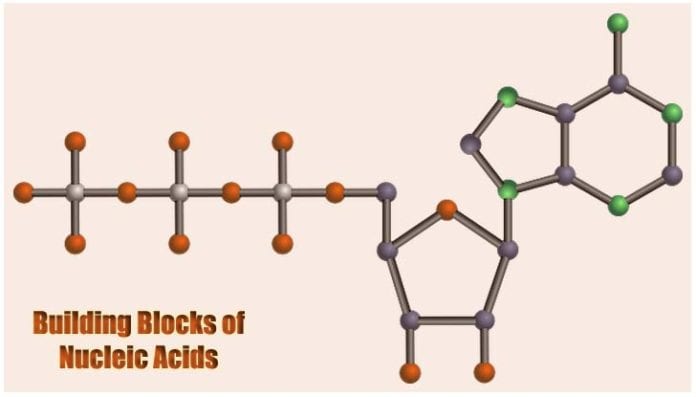 Building Blocks of Nucleic Acids: The study of heredity (the passing of traits from parents to succeeding generations) primarily depends on the understanding of the biochemical properties of the genetic material namely DNA in eukaryotes and bacteria, and RNA in viruses.

It is important to note that some of the essential characteristics of the genetic material in the form of nucleic acids arise from its building blocks: the nucleotides.

Therefore, the knowledge about these small units can serve as critical points to the greater understanding of their role in biological systems.

Below, learn more about the building blocks of nucleic acids, their structures, functions, as well as their importance.

What Is A Nucleotide?

DNA and RNA are both made up of small building blocks called nucleotides. These units are covalently linked: between the phosphate group of the fifth carbon of one nucleotide to the pentose sugar attached to the third carbon of the second nucleotide.

Structure of The Nucleotide

The structure of the nucleotide maximizes bonding potential as it allows same building blocks to be connected to one another through the formation of hydrogen bond between each nucleotide’s nitrogenous base.

Such structure is also efficient in allowing the creation of phosphodiester bonds between the pentose sugar of one nucleotide to the phosphate group of another. These connections, therefore, contribute to giving the DNA’s “double-stranded” ladder-like figure.

The structure of nucleic acids (i.e., DNA) can be likened to a ladder that is made up of alternating steps that are symbolizing its three significant parts: pentose sugar, the phosphate group, and the nitrogenous base.

A pentose sugar is a five-carbon sugar that serves as the polymer backbone of DNA and RNA. RNA has the ribose sugar while DNA has the deoxyribose. The two differ regarding the functional group attached to the second carbon position. An -OH group can be found in ribose while deoxyribose has hydrogen instead.

Along with the pentose sugar, the phosphate group makes up the polymer backbone of DNA and RNA. The group is attached to the fifth carbon in place of the hydroxyl group.

Through his observations, Phoebus Levene discovered that the genetic material is made up of four smaller sub-units distributed in equal quantities.

The bases are part of the DNA and RNA that serve as the storage of information and encodes for the phenotype, or the visible physical characteristic of an organism. The five known nucleotide bases are described below.

As alluded to earlier, adenine belongs to the purines which are composed of a nitrogen group with six members of nitrogen ring attached to a ring with five nitrogen units. In DNA, adenine pairs with thymine whereas in RNA, it pairs with uracil.

Also a purine molecule, guanine is composed of a fused system of pyrimidine and imidazole ring with double bond conjugates. This bicyclic molecule is planar due to being unsaturated.

The next base is the cytosine , a pyrimidine base that pairs with guanine. When combined with ribose, cytosine forms the nucleoside cytidine. This molecule can then be further phosphorylated to form phosphoric groups.

Derived from the hydrolysis of deoxyribonucleic acid via catalytic reduction,thymine is a pyrimidine base that pairs with adenine in DNA. The bond is secured with a hydrogen bond that stabilizes the structure of the nucleic acid.

Uracil is a pyrimidine that replaces thymine in RNA and therefore is the one that pairs with adenine. Through methylation, uracil can be converted into thymine. 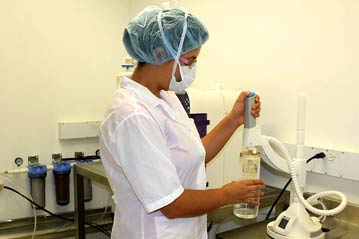 As building blocks of nucleic acids, nucleotides primarily aid in storing genetic information that will be later the basis for the manifestation of physical traits. Moreover, they also play roles in various biological and physiological processes. As molecules, they help in the transport of ATP and serve as biological catalysts in most reactions involving biomolecules.

It is quite impressive to know that no living organism in this world bears the same sequence of nucleotide bases. Because of such genetic diversity, organisms exhibit various phenotypes that help them survive.

What do you think could have happened if the nucleotide never evolved just like the way it is now?