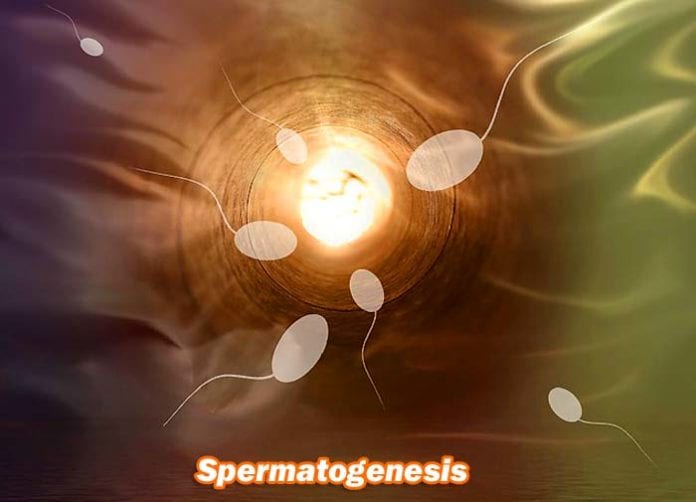 Males produce their gametes through a process called spermatogenesis. Let’s take a closer look at how this complex process occurs.

Spermatogenesis is the production of sperm from the primordial germ cells within the male reproductive organs, the testes. The process of spermatogenesis occurs in the epithelium of the seminiferous tubules, with the spermatogonia and the spermatozoa at the lumen of the border of the tubule.

In general, spermatogenesis is divided into two developmental stages: spermatocytogenesis and spermiogenesis. The said stages are illustrated and described below.

Spermatocytogenesis is a developmental stage that includes a series of cell divisions during which spermatogonia differentiate into spermatids.

Mitosis is a type of cell division wherein the parent cell typically divides into two daughter cells that have exactly the chromosome number as the parent.

On the other hand, meiosis is the type of cell division that involves the division of the chromosome number into the half.

After meiosis I, the secondary spermatocytes will immediately undergo meiosis II to produce the spermatids.

On the other hand, spermiogenesis is the stage where spermatids differentiate. While the cells during the stage of spermatocytogenesis are typically rounded in appearance, they will dramatically change this configuration when they enter spermiogenesis, where they will have to be adapted for fertilization.

Once matured, the sperm cells will be transported through the seminiferous tubules and stored in the epididymis of the testes until they are released outside the male body.

Tabulated below are the steps in spermatogenesis and how long they take to occur.

For more visualizations of the process, you may want to check this video.

To learn more about Human Physiology as a free online course, you may visit this website: http://janux.ou.edu

The maturation of the male reproductive system happens under the influence of the hormone testosterone which primarily removes unnecessary cytoplasm and organelles. These unnecessary cytoplasms are known as residual bodies and are engulfed by the Sertoli cells found in the testes. The result of the engulfment is spermatozoa which are mature but lack motility, hence are sterile. Nevertheless, through spermiation, these spermatozoa can be released into the seminiferous tubule.

Differences Between Spermatogenesis and Oogenesis

While much has already been known about male reproduction, to date, no specific about the functions of Sertoli cells are available. The development of more accurate evaluation techniques would greatly enhance our understanding spermatogenesis and the function of Sertoli cells process.

But looking into it, isn’t amazing how this process is carried out without one’s consciousness is the secret for the perpetuation of the animal kingdom?