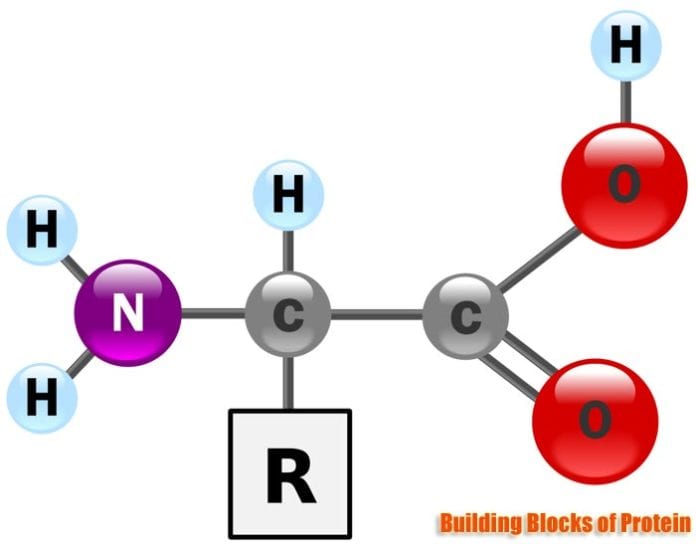 Building Blocks of Proteins: We all know that proteins are essential to living organisms. Biochemically speaking, amino acids (short for α-amino carboxylic acid) are a group of organic molecules that are known to be the basic building blocks of proteins.

We know how proteins play crucial roles in almost all biological and physiological processes, and these amino acids are just equally important.

To tell you how important amino acids are, a rough estimate of about 50 to 2000 amino acids typically comprises a protein. While some of them are only used to create proteins, others perform a variety of roles.

Let’s explore on what are the building blocks of proteins in this page.

The Discovery of Amino Acids

The discovery of amino acids can be attributed to the combined works of previous scientists (i.e. John Haldane and Harold Urey) who worked on the emulation of the primordial Earth’s atmosphere. For instance, in 1953, scientist Stanley Miller was responsible in analyzing the compounds that settled during the said experiment and from there he discovered that some organic compounds can be formed, particularly, amino acids. He discovered the amino acids glycine, aspartic acid, glutamic acid, alanine, and others.

Structure of An Amino Acid

As its name suggests (from the root word amine), an important component in an amino acid is a nitrogen molecule. During its biosynthesis, the ultimate source of nitrogen is the atmospheric nitrogen, an almost an non-reactive gas but can be useful when reduced via nitrogen fixation.

Amino acids are made of a two-carbon bond wherein one parts is known to be the carboxyl (COO-) group. The first carbon makes up the carboxyl group while the other is attached to the amino group.

Basically, all amino acids have almost the same fundamental structure and only differ in the structure of the R group attached to it.

In addition to the aforementioned structural characteristics, amino acids are also distinct because of their chirality and acid-base behavior. Such properties allow these amino acids to have profound effects on their overall biological activity.

It is important to note that amino acids are capable of exhibiting chirality (optical activity), wherein the R group may be located on either side of the C-C bond. In nature, amino acids are L-isomers in form. The only amino acid that does not conform to this is the amino acid glycine.

Interestingly, one distinct characteristic of amino acids is the presence of both acidic and basic group in the first carbon atom, therefore making it amphoteric (can act as either an acid or base). Sometimes, when subjected to a specific pH, amino acids will acquire the same number of positive and negative ions in the overall molecule. This pH is called its isoelectric point.

How Are they Joined Together?

The bond that joins together amino acids to become proteins is called a peptide bond. This bond is an amide bond, which a type of covalent bond that is created by the reaction (nucleophilic addition and elimination) between the amino group of one amino acid and the carboxylic group of another. As a result, one molecule of water is created as a byproduct.

When joined, amino acids form chains called polypeptide (naturally based from the bond that binds them together) chains, which eventually form the protein structure. As such, a single protein can consist of several specific sequences of amino acids.

To know more about how they’re formed, checkout this video.

At present, more than 500 amino acids have been found to occur in nature; however, only twenty of them actually participate during translation process and are deemed as essential ones.


As depicted in the figure above, amino acids can be divided into four groups depending on their R group and overall structure: non-polar, polar, acidic, and basic.

Nonpolar amino acids have R groups which have either attached aliphatic or aromatic side chains. As a result, these amino acids tend to be hydrophobic (water-fearing) in nature. Examples of this group are glycine, alanine, valine, leucine, isoleucine, methionine, tryptophan, phenylalanine, and proline.

The distinguishing characteristic of this next group of amino acid is having at least one atom of nitrogen, oxygen, or sulfur, that is readily available to pair with water, hence making them polar. Examples of this group are serine, threonine, cysteine, tyrosine, asparagine, and glutamine.

As their names suggests, aspartic acid and glutamic acids are the two examples of an acidic amino acid. The presence of a carboxylic acid on one side of the amino acid gives them the acidic property.

Last but not the least are lysine, arginine, and histidine which all fall under basic amino acids. These amino acids have a basic R group, hence the name.
We can observe that most amino acids are hydrophilic (includes polar, acidic, and basic) in nature. Hence, they make an ideal component of globular proteins in solutions.

While most of them act as monomers that form larger units called polymers, amino acids can also function on their own. The following are some of these important functions.

Aside from building in chains, amino acids also play roles in immune function, management of diseases, and the production of bioactive compounds to combat these. Interestingly, one amino acid (i.e. arginine) is capable of synthesizing the compound nitric oxide that aid in lowering the blood pressure and regulates the contraction of muscles.

When necessary, amino acids can be metabolized for energy . For instance, the amino acids cysteine, glycine, and glutamic acid are precursors for the antioxidant glutathione. In addition to this, histidine is used to create the enzymes that are needed for the production of red blood cells. Furthermore, these amino acids are also needed to synthesize a variety of hormones in the body.

3. Precursors of Other Nitrogen-Containing Molecules

Aside from the aforementioned functions, did you know that other biological molecules also have amino acid precursors? Among these are the nitrogenous base of the nucleotides that eventually constitute the deoxyribonucleic acid (DNA) and the ribonucleic acid (RNA). Moreover, cofactors such as chlorophyll in plants and heme in animals are also derived from amino acids.

In this article, we have explored the building blocks of proteins, various chemical structures of amino acids in general, and how that fact controls the shape and eventually dictates the protein’s function. We have also learned that their functions are not only limited to this.