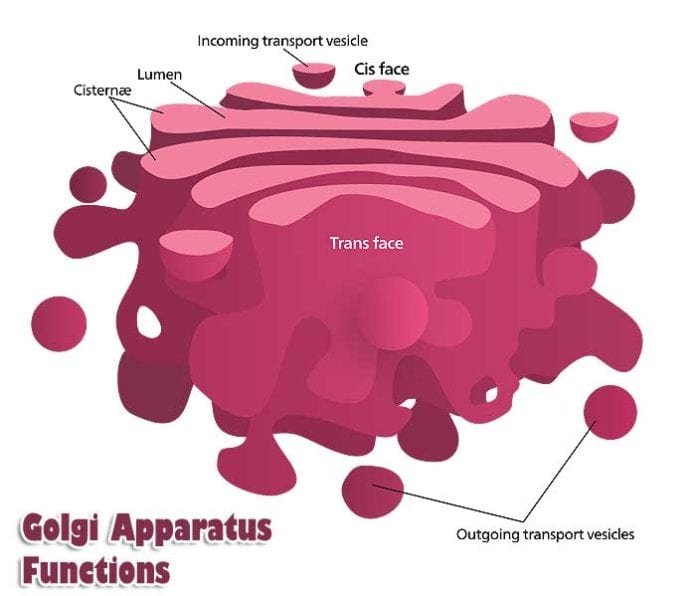 Golgi Apparatus Functions: The cell is the fundamental functional and structural unit of life. All cells comprise of cytoplasm, which holds various organelles enabling the cell to perform different functions. One such organelle present in eukaryotic plant and animal cells is the Golgi apparatus.

Suggested Reading: Cellular Organization – Exploring Inside of a Cell

The Golgi apparatus has a flattened stack like structure containing flat disc-shaped membranes called cisternae. It has two faces, the cis face and the trans face at which vesicles bud bringing and carrying proteins to and from the Endoplasmic Reticulum (ER).

Proteins arrive from the convex ER, enter at the cis face for processing, modification, and transportation within the Golgi apparatus, and exit from the concave trans face.

Also known as the Golgi complex, its primary function is to receive, process, and sort proteins coming from and to the ER.

Functionally, The Golgi Apparatus has four distinct regions: The cis Golgi network, The Golgi Stack which is further divided into medial and trans sub-regions, and the trans-Golgi network.

Proteins coming into the Golgi from the ER pass through each of these regions and then exit from the trans face of the Golgi network to be sorted.

The Golgi Apparatus was discovered by biologist Camillo Golgi in 1898 during an experiment that involved staining neuronal cells. It was described as an intracellular reticular compartment inside the cell.
Suggested Reading: See the Full History of Cell Biology

Here are the top 8 functions of the Golgi apparatus:

The Golgi Apparatus is responsible for protein processing events such as glycosylation that takes place within the Golgi bodies.

The Golgi Apparatus is responsible for processing and modifying lysosomal proteins.

One of the essential functions of the Golgi Apparatus is Lipid Metabolism.

In plant cells, the Golgi Apparatus is the site of synthesis for complex polysaccharides that form a part of the cell wall of plants.

The Golgi Apparatus forms the transportation network for movement of molecules and proteins to and from other organelles of the cell.

Proteins, lipids, and molecules are transported to other cellular compartments and organelles by the process of Exocytosis that occurs in the Golgi Apparatus.

In a similar fashion, the Golgi apparatus is also involved in a secretory pathway that allows movement of materials into the cell, from its Cis-face.

The Golgi apparatus sorts and packages proteins and lipids processed and modified to their appropriate destinations.

As you can see, the Golgi apparatus is the central transportation hub for the movement of all molecules, proteins, lipids, and other materials.

It acts as a central cell station, which receives materials and processes, modifies, packages, and sorts them to their destination.

Golgi Apparatus is an essential and indispensable part of the cell without which the regular functions of the cell cannot occur.