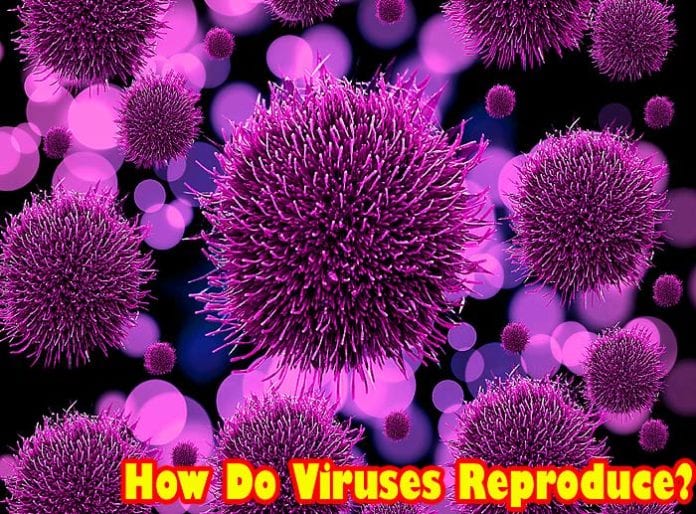 How Do Viruses Reproduce? Viruses are not considered living organisms – but still, they are everywhere. These unique intracellular parasites have managed to reproduce using other cells.

There are multiple types of viruses, and each type has a slightly different way to make copies of themselves using proteins and ribosomes inside the cells.

Let us look closely at how they manage to do this.

As you may know, there is an ongoing debate about whether one should list viruses among living things. Here are the reasons for the confusion:

So, we can see that viruses are small – but so are bacteria. Viruses also contain substances found in living organisms, such as proteins, nucleic acids, and sometimes even lipids. The main difference between a living and non-living entity is whether it can reproduce.

Suggested Reading: How do viruses differ from bacteria?

Can viruses reproduce on their own?

If we look closely at viral capsids, we would see that they usually contain some proteins that can assist in copying their genome material. However, this is not enough.

What do viruses need to reproduce?

Why is it so crucial that viruses are acellular? It is crucial precisely because cells have everything; they need to produce their own molecules:

Viruses lack all that. That is why they need to use a cell of their choice to do the work for them.

Do viruses have DNA?

We have already mentioned that all viruses have genomes. Genomes are essential for a virus and are hidden within the protein capsid.

What is the genetic material of a virus?

Besides DNA, viruses can also have RNA-based genomes. There are several types of viruses – and each has a different nucleic acid that serves as its genetic material:

Whether the viral genome is composed either of RNA or DNA, they still contain very few genes. However, those few genes still make the virus able to hijack cells for its own purpose. This process has several stages, and some stages are different between various virus types.

Viruses go through a process called the viral replication cycle which has several stages:

Do all viruses reproduce the same way or it differs between viruses?

Most viruses go through the same stages of replication. However, depending on the type of genetic material they have, or types of proteins their capsid contains, they may replicate in a slightly different way.

The main differences can be noticed at the stage of penetration and replication stage, which we would see later.

First of all, a virus finds the cell it needs and attaches to its cellular wall or plasma membrane (depending on the type of cell).

Once a part of the virus is recognized by the receptor of the cell, the virus can use this receptor to enter the cell.

Some viruses do not use the transport of the cell to enter – they can make a hole in the membrane and inject their genomes through it directly.

After the virus has sneaked into the cell, it needs to release its genome. The capsid falls apart, some of its proteins get destroyed, and the “naked” genome appears in the cytoplasm. Then the genome can take several ways to replicate depending on its type.

At this stage, the virus uses the proteins of the cell to replicate its genome. This particular stage is different in different types of viruses:

Double strand DNA viruses: The double strand viral DNA also goes to the nucleus after uncoating. There, the nuclear protein can make new viral DNAs, as well as RNA “messages” for viral proteins.

As far as the RNA viruses go, they undergo a different process-they replicate in the cytoplasm:

All the newly made genomes and viral proteins are assembled into viral particles.

When there are too many viral particles inside the cell, they are ready for release. There are two ways the virions can exit the cell:

After the viruses exit, they move to another cell, enter it and start the cycle again. This cycle of virus reproduction is often called the lytic cycle.

How do viruses cause diseases?

The viruses that reproduce through a lytic cycle can cause diseases. There are several reasons why:

Not all viruses cause infections right away. Some viruses do not pass through lytic but through the lysogenic cycle.

Viruses that lie dormant usually do not cause diseases, but as they insert themselves into the host DNA randomly, they may disrupt the normal function of the cell genome and cause mutations. As such, they also may be contributing to the transformation of healthy cells into cancer cells.

As you can see, viruses have a variety of ways to reproduce despite being relatively simple in structure. Because viruses are intracellular parasites, viral infections are tough to treat. 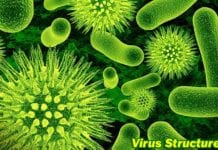