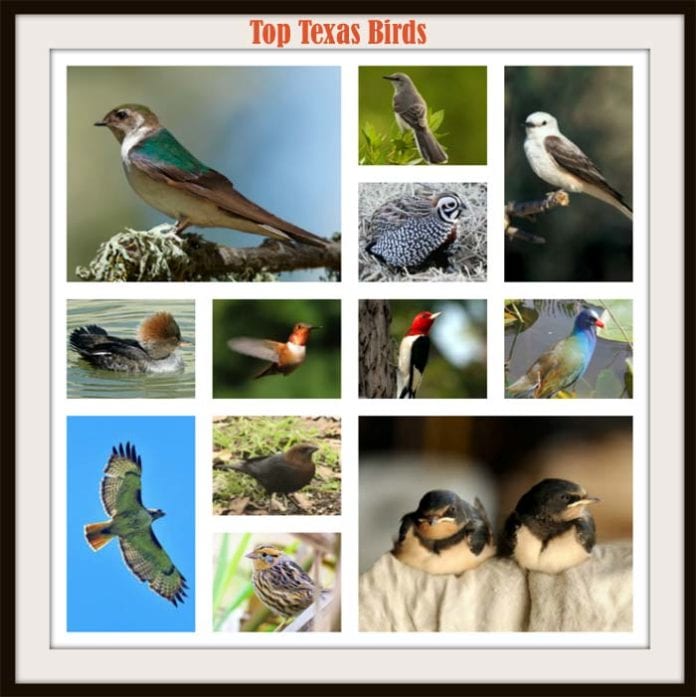 Texas Birds: Texas, because of its geographic location and extra diverse regions, is blessed with abundant bird wildlife. It is even considered as the most diverse bird state in the United States of America.

At present, the industry of birding in the state, as well as the whole North America is rapidly growing. So to help you identify some of the most famous Texas birds that are native to the state of Texas, we have listed them below.

In case, you have missed out famous Hawaiian birds and famous Florida birds, check them out first. 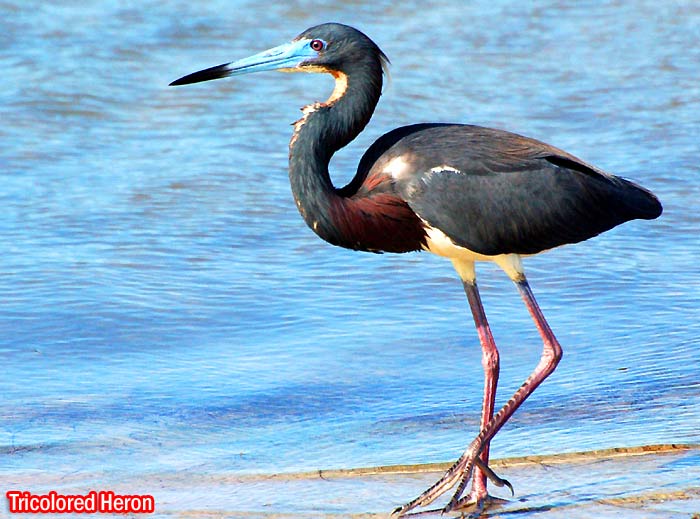 Formerly called as the Louisiana Heron, the Tricolored Heron Egretta tricolor is a Texas bird that likes to thrive in serene yet shallow waters. This bird is characterized by having a stunningly long beak and neck and has a pale blue-green color. 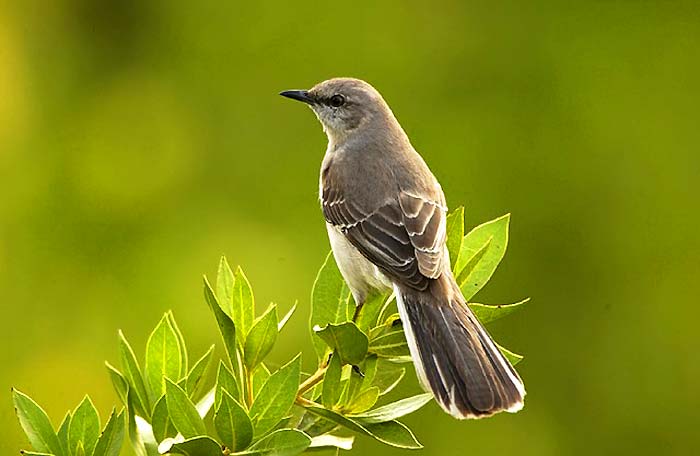 The next Texas bird on our list is the official state bird of Texas – Northern Mockingbird. This white and gray colored bird is an excellent singer. The binomial name for this bird is Mimus Polyglottos which comes from old Latin which means “many-tongued mimic“. This versatile vocal specialist Texas bird can mimic dozen+ songs from other bird species as well. 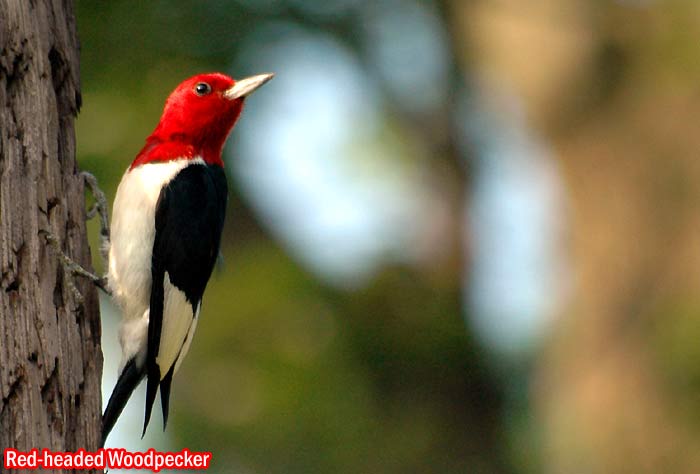 Unlike most woodpeckers, the Red-headed Woodpecker is so good at catching insect preys, and they also tend to eat huge amounts of nuts like acorns. However, this bird of Texas also catches insects through the normal woodpecker way of making holes in wood.

Suggested Reading: What Do Woodpeckers Eat? 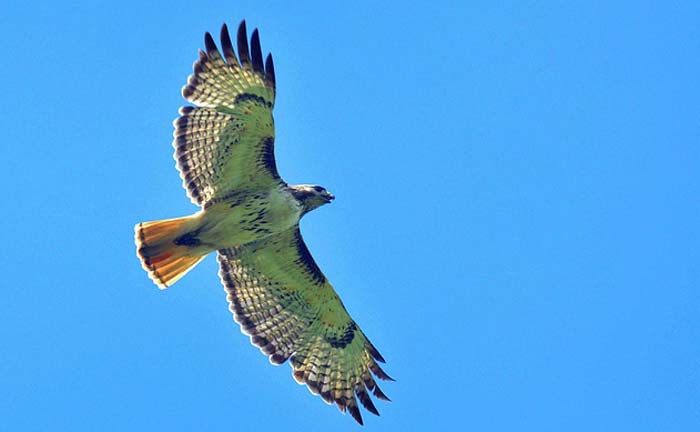 After Red-headed woodpecker, the next bird of Texas in our list is Red-Tailed Hawk who gets the name from its red-tail (sort of more of orange color). The wings are composed of white blotches mixed with chocolate brown feathers. This bird is sometimes known as ‘Chicken Hawk’. These large raptors often can be spotted in high hills of Texas or highways sitting quietly for delicious rodent meals. 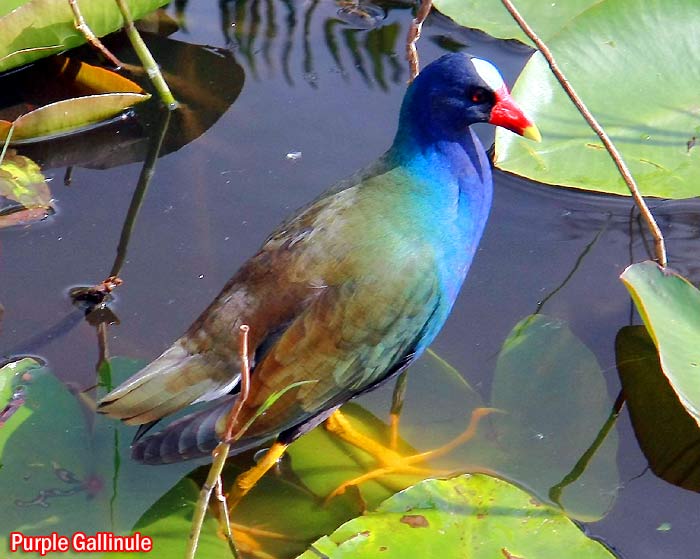 Unlike the Common Gallinule that only has a wide white side stripe, the Purple Gallinule is characterized by a variety of colors: its head, neck, and under-feather are purple, its back colored green, its forehead tinted blue, its bill colored red yet tipped with bright yellow, and its legs also colored yellow. 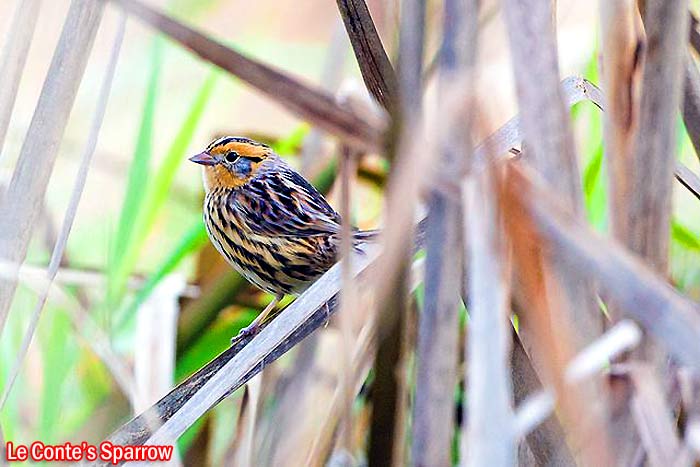 Also called the Le Conte’s Bunting, the Le Conte’s Sparrow is a small yet chunky sparrow that likes to thrive in the relatively wet grasslands and shallow marshes. 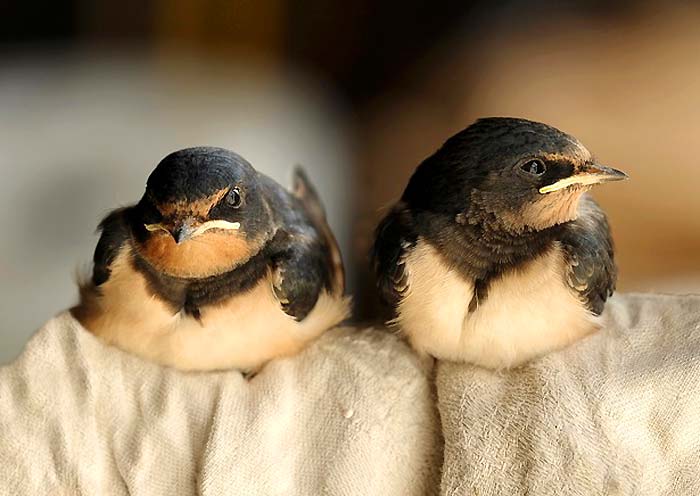 The next Texas bird that flies into our list is the cute Barn Swallow (also known as “Mud Swallow”). These tiny birds build their nests on bridge muds, porches, and patios. The belly is covered with gradient orange while the head, back, and tail are covered with dark blue plumages. There are a couple of distant relatives to these birds in Texas namely Cliff Swallows and Cave Swallows. Though they are anatomically same regarding genetic make-up, the cliff swallows differ in their nest building techniques. 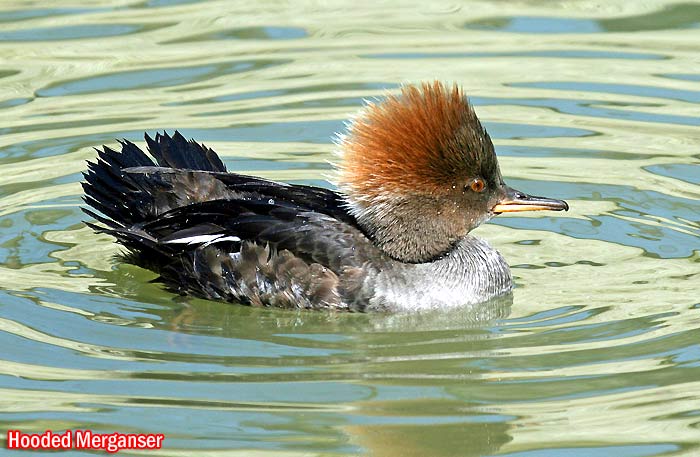 The Hooded Merganser, one of the smallest mergansers native to North America. This Texas bird is characterized by a fan-like crest that can be opened or closed. 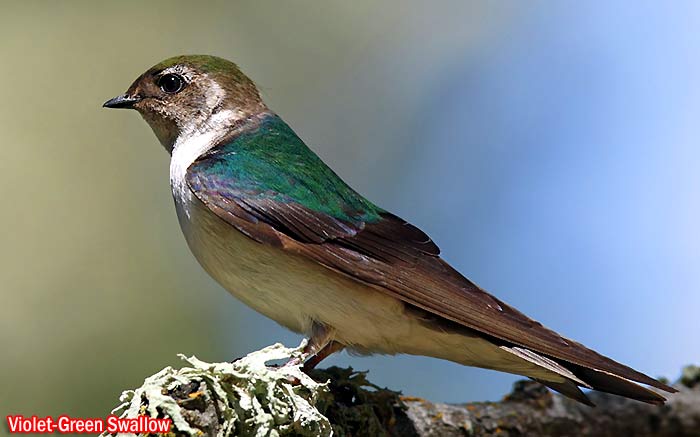 The next bird in this Texas birds list is the Violet-Green Swallow Tachycineta thalassina, that is often seen roaming the skies over mountain pine forests. 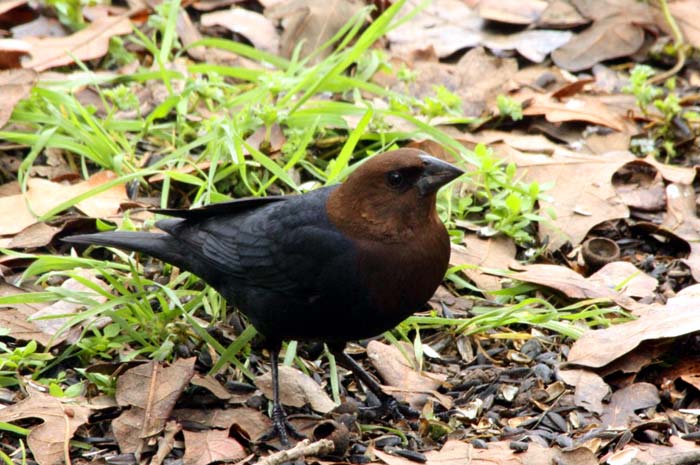 This Texas bird has no permanent home (nor raise a family) because this bird migrates with the moving bison herds (hence the name cowbird). So this bird has no time to settle down in one place. Perhaps the word “lazy goose” should be given to this bird because they lay eggs on unattended other birds’ nest and then fly away. So all cowbird chicks are always raised by foster parents of other bird species. The male cowbird has all beautiful features such as brown colored head, glossy black body while the female cowbird is just vanilla with overall one color throughout – grayish brown. 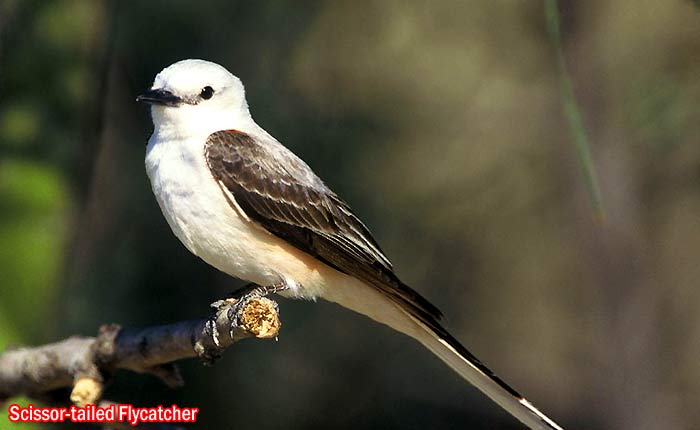 The sight of a Scissor-tailed Flycatcher perched on fences and electricity wires is a common site in Texas, Unites States especially during the spring and summer. 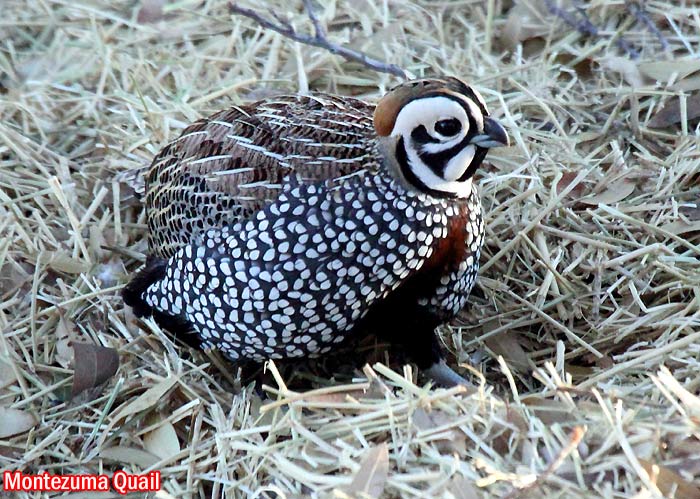 The Montezuma Quail is endemic to various places in the United States like Texas, New Mexico, and Arizona. This bird typically inhabits the oak-pine woodlands and savannas of these areas. 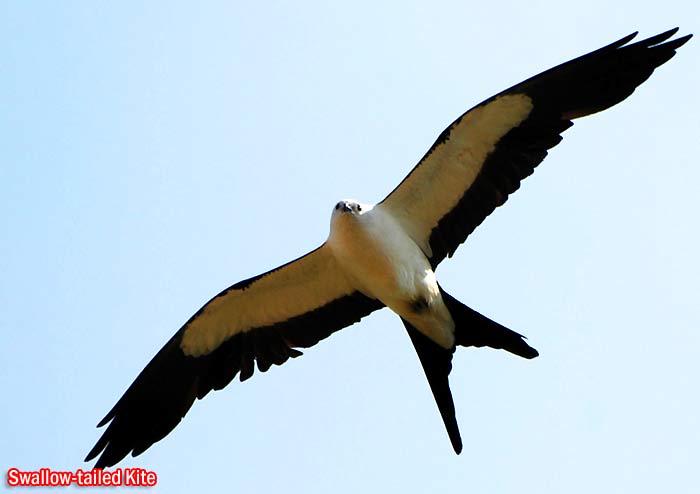 The Swallow-tailed Kite is one of the few bird species that is highly unmistakeable when flying, mainly because of its long tail that has forked feathers. 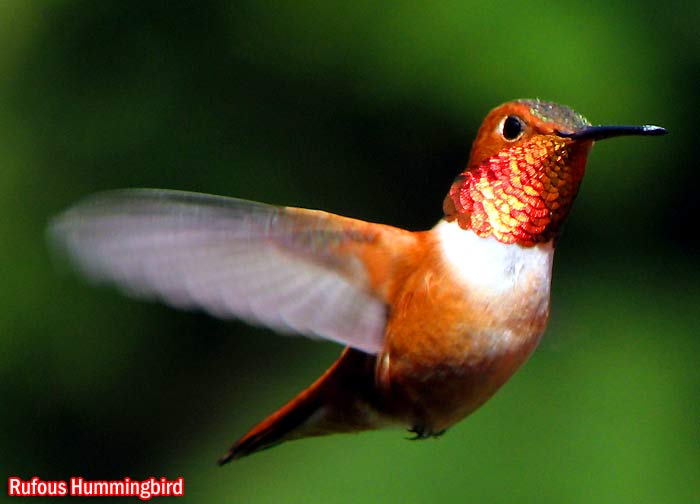 Considered as one of the most attractive and most charismatic hummingbirds that ever existed in North America, the Rufous Hummingbird is famous for its ability to defend flowers against other organisms that are sometimes larger than itself.

Sure, there are still a lot of Texas birds that remain unlisted in this article. Can you name some of them in the comments section below?