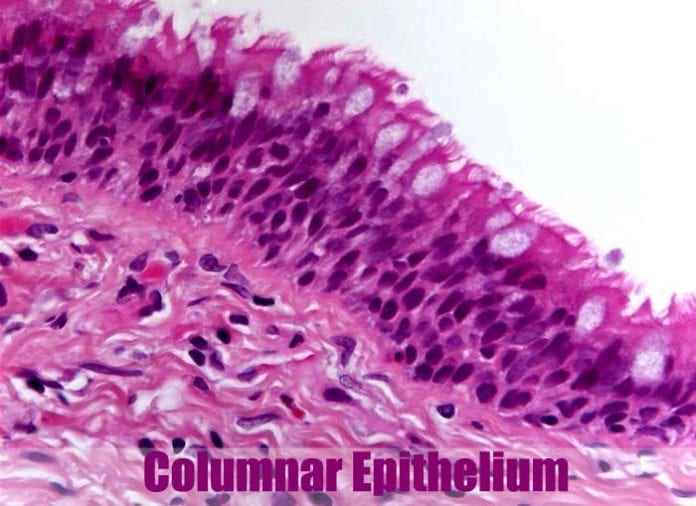 The epithelium, the outermost layer of the body surface, consists of a layer (or layers) of similar cells that are bound tightly together. Found in the epidermis, surfaces of tubules and sacs, and in the eyes, it is an integral part of any living organism as it serves the first line of protection from any physical and chemical abrasion encountered by the body.

Aside from that, the epithelium controls the entry or exit of materials across the physical barrier. In the human body, per se, there are already different kinds of epithelium which are very specific for the function they serve and location they are in.

To be specific, various epithelia are classified according to the shape of cells and the number of cell layers that make them up.

In this article, you will get to learn about a (somewhat) confusing yet exciting kind of epithelium: the pseudostratified columnar epithelium.

You will also learn that the epithelia are not just physical barriers but can also be specific and perform functions you could never have imagined.

Anatomy of the Pseudostratified Columnar Epithelium

The term “pseudostratified” refers to the kind of epithelium characterized by “falsely” stratified (arranged into layers) single layer of cells that are attached to the underlying basement membrane.

But when observed precisely, only some of the cells in the epithelium reach the free surface; others do not even reach up to face the lumen. Aside from that, these cells are tightly packed with their nuclei being forced to appear so dense, hence look like layers.

The diagram above illustrates a pseudostratified epithelium. In terms of shape, the cells are variously shaped, but most of them are taller than wide (as implied by their name, columnar) and are shown to appear like miniature pillars.

NOTE: If a specimen appears to have layers, but there are cilia, it is, therefore, a pseudostratified columnar ciliated epithelium since other stratified epithelia bear no cilia at all.

Functions of the Pseudostratified Columnar Epithelium

The pseudostratified columnar epithelium is found in different body parts, and each specific location serves different functions. Listed below are some of them.

To be specific, the main function of columnar epithelial cells is the secretion of mucus. This function is served by cells known as goblet cells, which are named because of their shape.

This type of epithelium in regions that need to secrete mucus to help trap foreign materials and propel them away using a modified cytoplasmic projection called the cilia.

This type of epithelium is also present in the vas deferens and serves to aid in the propelling of the sperm during ejaculation.

Basically, there are two major kinds of pseudostratified columnar epithelium: ciliated and non-ciliated. While both of them serve the functions mentioned earlier, each of them is differentiated as well. 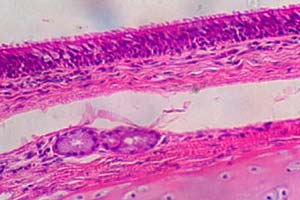 The most common types of pseudostratified epithelia occur as ciliated types. The presence of cilia in epithelial cells is a kind of specialization that gives the cells the ability to propel mucus along the surface. The resulting movement is referred to as the “ciliary escalator “. 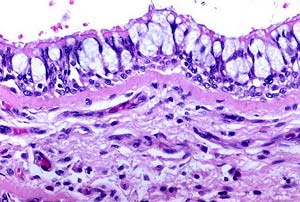 A special feature of this kind of pseudostratified columnar epithelium is its absence of cilia but the presence of other cytoplasmic projection known as the stereocilia. Electron micrographs reveal that these structures lack the structural components of the cilia itself; hence they are classified as different structures.

Various studies have already been performed (and continuously being shown) to increase our understanding of the human epithelia, which in the broader sense can provide new insights that could improve human health as well.

This article just showcased that the pseudostratified columnar epithelium, despite its varying forms, plays a vital role in many physiological functions.

For one, the pseudostratified columnar epithelium is an amazingly complex epithelium that serves many functions.

Are you familiar with other epithelia? Can you tell where they are located and what purposes they serve?