Cells are considered to be the basic unit of life and are mainly responsible for a wide variety of life processes.

Cells, through the course of evolution have adapted several ways to perform these tasks for survival. And did you know that like any other organisms, cells also need to breathe, eat, drink, and remove wastes?

In this article, you will learn about a certain process that somehow keeps the cell “hydrated” in order for it to continuously exist – pinocytosis.

Find out more below: 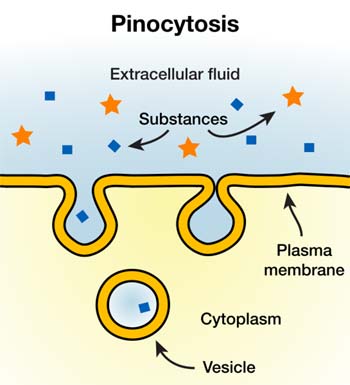 In cellular biology, pinocytosis is a type of endocytosis that involves the taking in of extracellular fluid into the cell.

The Discovery of Pinocytosis

In 1931, scientist W.H.Lewis described an unusual phenomenon occurring in the plasma membrane wherein some parts of the culture medium were trapped in the invaginations and pinched off in the cellular vesicles.

How Does It Work?

Pinocytosis can occur both constitutively and as a response triggered by extracellular signals. The entire process of pinocytosis is very common among eukaryotic cells and it is rather simple as it involves only a few cellular organelles.

The above video shows how a cell engulfs extracellular fluid into a vesicle and how this view looks like in an actual process (observed through Transmission Electron Microscopy). This was the original presentation by W.H.Lewis back in the last century.

There are apparently two distinguished levels of pinocytosis: micropinocytosis and macropinocytosis. The following are described below:

As its name suggests, this level of pinocytosis occur in smaller scale. The vesicles formed in this pinocytosis have originated from the caveolae (depressions in the cell surface) and have a diameter of about 0.1µm.

In contrast to micropinocytosis, the vesicles formed during macropinocytosis are relatively larger with diameters ranging from 1 to 2µm. The vesicles originated from the invaginations of the surface ruffles or sometimes the plasma membrane.

Examples of Pinocytosis in Cells

As alluded to earlier, pinocytosis is a process that occurs almost all of the time. The following are some of the most common types of cells that perform pinocytosis:

The small intestine is an organ known for performing nutrient absorption; hence, it is no question why the cells lining the intestinal epithelia perform pinocytosis well. Basically, cells with microvilli projections are present in order to readily absorb fluid nutrients from the extracellular matrix.

One of the many cells that perform pinocytosis are the epithelial cells. These cell utilize pinocytosis in order to take in the fluid portion of the blood at the capillary surface. The formed vesicles then travel across other capillary cells and discharge the fluid into the surrounding tissues.

Like the cells mentioned above, the egg cell ingests the nutrients present in the extracellular environment for the future growth of the zygote.

Difference Between Phagocytosis and Pinocytosis

The process of pinocytosis is often being related to phagocytosis with each of them having its own notable mechanisms and complexities. Tabulated below are the major differences between the two.

Despite being induced by specific substances found in the extracellular environment, other materials like salt, minerals, and water can be found to be enclosed within the pinocytotic vesicles.

With this, scientists think that pinocytosis is predominantly nonspecific as compared with other types of endocytosis that are specific. An evidence for this is that all other molecules included in the fluid are taken into the cell.

On top of all of these, isn’t it amazing how such minute cell performs a very complicated task?