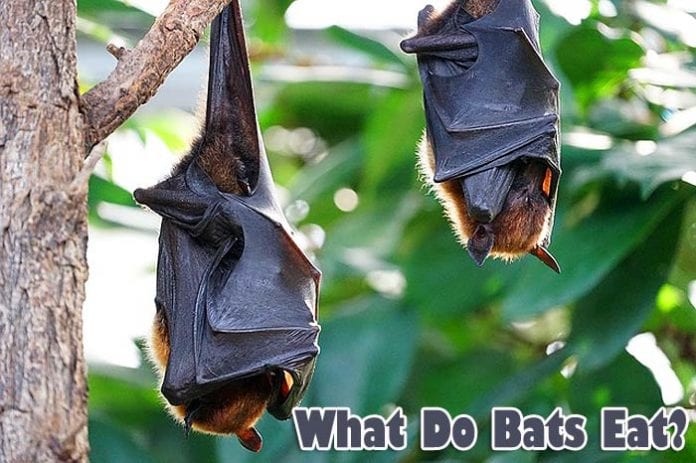 Some species of bats specialize in eating insects, others eat fruit, nectar, and pollen, while others display carnivory on vertebrates.

What Do Bats Eat?

Scientists have described over 1,100 bat species. Bats were traditionally classified as either Megachiroptera (megabats) or Microchiroptera (microbats). These terms were misleading because some microbats were large, and some of the megabats were small.

The order Chiroptera, which bats are classified, is further subdivided into 18 families. A sample of the species drawn from some of these families will be studied in this section.

What Do Bumblebee Bats Eat?

The Bumblebee bat species mainly consume insects, which they get by nibbling them from leaves.

The Cuban greater funnel-eared bat mainly feeds on soft-bodied insects with examples of crickets and moths.

What Do Seychelles Fruit Bats Eat?

How Do Bats Hunt?

When Do Bats Eat?

Bats are mostly nocturnal, meaning they tend to be more active at night. They will be found hunting for their food and eating at night.

How Often Do Bats Eat?

Bats have a fast metabolism and mighty flight muscles, which means they need high energy intake.

Where Do Bats Fit in the Animal Food Chain?

Bats play an essential role in the animal food chain as prey and predators.