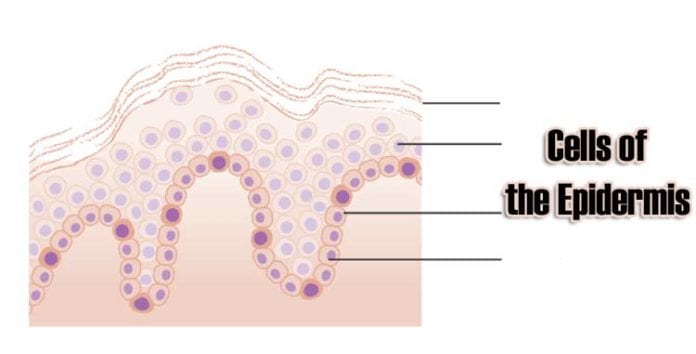 Generally, in the big schema things of the human body, the skin often does not strike as an organ. However, the skin is composed of tissues and performs mission-critical functions in the body.

The skin and their accessory structures such as hair, glands, and nails make up the integumentary system, which provides the body with overall protection.

The skin contains multiple layers of cells and tissues, which are attached to underlying structures such as blood vessels and bones by connective tissues.

Cells of the Epidermis

There are 4 types of skin cells in humans namely Keratinocytes, Melanocytes, Langerhans cells, and Merkel cells. 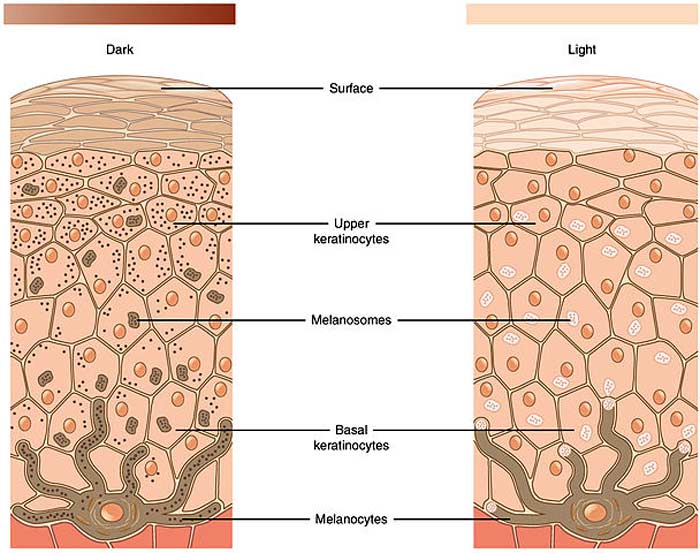 A keratinocyte is the primary cell type (about 90%) within the epidermis which is the outermost layer of the skin. The alternate names for keratinocytes are basal cells since they are found in the basal layer (the stratum basale) of the skin.

Melanocytes are second types of skin cells which produce melanin. Melanin is a dark pigment contained inside melanosomes that determines the skin color of the person. They are found in the bottom layer of the skin’s epidermis.

The examples include the middle layer of the eye, the inner ear, meninges, bones, and the heart. Melanin protects against the Ultra-Violet (UV) radiation and support in the immune system.

Langerhans cells are found in all layers of the epidermis. However, they are most prominent in the stratum spinosum layer (a layer between the stratum granulosum and stratum basale). Examples include blood vessels, the mucosa of the mouth, foreskin, and vaginal epithelium.

These Langerhans cells can also be found in other tissues, such as lymph nodes. Note that while similar in appearance, these langerhans cells’ structures different from the dendrites of neurons.

Merkel cells are also called Merkel-Ranvier cells or tactile epithelial cells. They are oval-shaped cells responsible for light, touch, and sensation and found in the skin of vertebrates.

Merkel cells are in plentiful in highly sensitive skins and make synaptic contacts with somatosensory afferent nerve fibers. Although it is very uncommon, these cells may become malignant and form a Merkel cell carcinoma-an aggressive and difficult to treat skin cancer.

Though it has been found that Merkel cells are derived from neural crest cells, the more recent experiments in mammals have revealed that they are in fact from epithelial in origin.

Layers of the Skin

The skin is composed of 3 layers namely:

This is the outer most superficial layer which is made up of 5 inner layers. They are Stratum basale, Stratum spinosum, Stratum granulosum, Stratum lucidum, and Stratum corneum.

In general, skin’s epidermal layer is subjected to constant wear & tear from external factors such as sunlight, chemicals such as soaps, and pollution.

Subcutaneous layer is also known as hypodermis. The hypodermis is the innermost layer of the skin. This layer hosts fat and connective tissues that house larger blood vessels and various nerves.

The primary function of the hypodermis is to act as an insulator for regulating the body temperature.

Why are tattoos permanent though skin cells die and get replaced?

The answer lies hidden in the second layer of the skin (Dermis). The permanent tattoo ink is injected till the dermis layer so that it stays permanent. If it is put on the outer layer, then it will be worn out as time progresses. That is why permanent tattooing is always a harrowing and painful experience.

Here are the main functions of the skin cells: