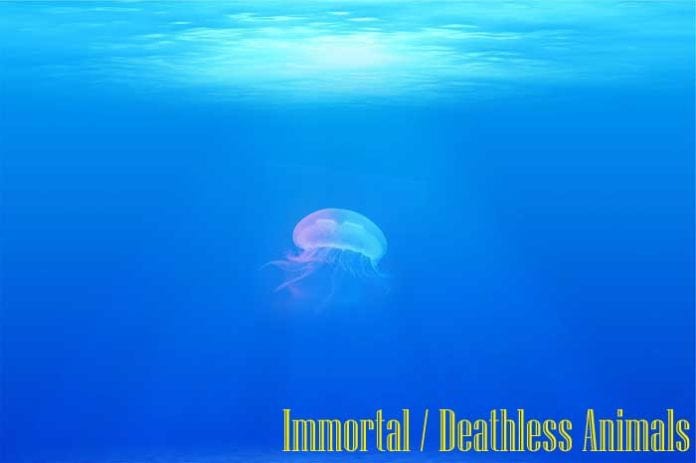 Immortal Animals: For many years, humans have sought absolutely everything to attain immortality. This endeavor includes the search for the so-called “Fountain of Youth” and even freezing cadavers in the hope of preserving and bringing them to life in the future.

There are already many existing plant and animal species that are seemingly deathless if not can live for a very long time compared to the lifespan of humans.

To put it in other words, these organisms could die as they might get killed by either a predator or a destructive environmental change or suffer from a disease. But unlike humans, they rarely die because of old age.

Below are some of these fantastic biologically immortal animals that live in this world. The following list is in no particular order.

As their name suggests, these tortoises are one of the largest species of tortoises in the world. These tortoises take a very long time to grow as they do not reach sexual maturity until over 30 years old. The oldest confirmed age of a tortoise was 255 years. This tortoise was Adwaita at the Alipore Zoological Gardens in Kolkata, India. However, scientists have revealed that some may have persisted twice that age.

Bdelloids are a group of freshwater rotifers (zooplankton) that can be considered “immortal” in the sense that they can tolerate extreme conditions like high heat, low temperature, and extreme pressure. Furthermore, they can also enter a state of “hibernation” and come back when they wish to do so.

Aside from their enormous size, another astonishing fact about bowhead whales is that they can live up to more than a hundred years. The secret to this? They can repair damaged DNA, hence are prevented from developing cancer. Scientists also suggested that these whales can survive the absence of oxygen even for a long time.

Believe it or not, some clams can live up to more than 400 years. Scientists explain that their long lifespan can be attributed to a process called “slowed cell replacement” but at present, there are still no reasons stating what makes them mature at a slow rate. This process, too, is still up for further studies.

Suggested Reading: What Do Clams Eat?

Although they’re not necessarily deathless (due to inevitable instances like being eaten by predators), some glass sponges can survive up to more than 15,000 years! This is because some species can control the growth of their spicules (mineralized structures) at a prolonged rate, hence slowing down their aging process.

Known as the longest-living vertebrate with an average lifespan of 272 years, this shark does not reach sexual maturity until 150 years. The secret to this is obvious: its incredible ability to withstand the intense darkness and freezing temperature at 2200 meters depth.

According to studies, the hydra is one of the few animals showing no signs of age deterioration. Being able to divide continuously and regenerate new body cells, hydras can keep themselves young for long periods (even until forever).

Lifespan: Immortal unless disease or predation

Did you ever wonder if you could return to being a child? This species of jellyfish can! Found in the waters of Japan and the Mediterranean sea, the immortal jellyfish is the only animal which can go back to being sexually immature after reaching maturity. This process can be indefinite as long as the jellyfish doesn’t die of either disease or predation.

Scientists suggested that through time, some lobsters can persist and even increase their fertility because of a certain enzyme called telomerase. This enzyme repairs the lost sections of the DNA; hence, “aged” cells are again reverted to being young. Though such a process renders them to stay “deathless“, the exact life span of a lobster is difficult to determine because of the regular molting of an exoskeleton.

Lungfishes are one of the oldest species of fish on the planet, and unlike other fishes, they can breathe out of the water and survive for long periods. In addition to that, they can slow down their metabolic rate and live even without nutrients for years!

This ubiquitous organism has a simple yet incredible organ system that allows the indefinite regeneration of any lost body part. Because of this, this organism apparently can stay young and can never get old (unless it wants to).

Living on seaweeds in shallow waters, Mesocentrotus franciscanus or the red sea urchin is considered to be “practically immortal“. Although amazing as it may sound, scientists say these urchins can never stop growing but don’t get old. While they can live up to more than a hundred years old, some may reach up to 200 years, given that the environmental conditions are good.

Coming from the Greek word “Sebastes” which means “magnificent“, this type of rockfish certainly lives up to its name. Known as the longest-living marine fish in the world, it can live more than 205 years old! In addition to this characteristic, the Rough eye rockfish is highly distinguishable because of prominent spines in the lower rim of their eyes.

Technically, sea anemones don’t live that long, but they can survive more than a hundred years with favorable environmental conditions! This is because when one of their tentacles or even their “head” gets cut, they can regenerate them into new ones.

These bugs are very resilient to freezing as they have special blood proteins that prevent this from happening. While their hearts and brains are not that resistant to freezing and can die completely frozen, they can be ‘revived’ to life when thawed out.

More Reading: Journal of the Royal Society of New Zealand (1992)

Lifespan: Up to Century

Also known as tardigrades, water bears are possibly the toughest animal on the planet. These creatures, though very tiny (not more than 1.5 mm), can survive extreme conditions like boiling (greater than 100°C, freezing (-272.8°C), cutting, drying, or even putting them in outer space! In addition to this, they can tolerate extreme radiation and can stop their metabolism for a long time and “come back to life” when they get in contact with water.

Throughout evolution, man has already accomplished many great things but is constantly reminded how fragile he is, like an organism. So while the above-mentioned immortal animals certainly can assist in seeking answers to long life, they can also hold the secrets to why people age in the first place. But then again, the question remains…

Is immortality more of a curse rather than a blessing? What do you think?