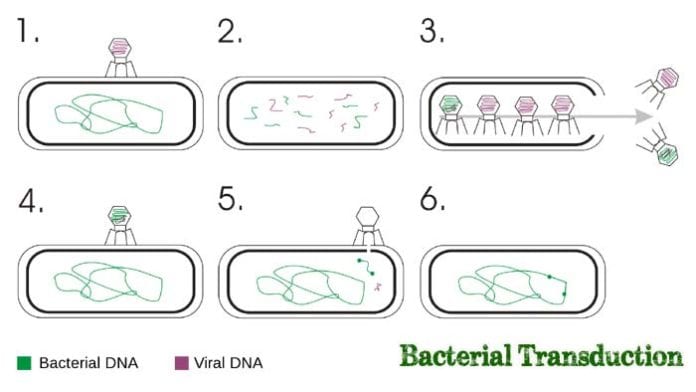 Bacterial Transduction: Have you ever wondered if you can have a certain genetic trait obtained from another organism? Well, that though is still not plausible but in the world of microorganisms, that is definitely possible. Let’s explore more about this mode of gene transfer below.

What is Bacterial Transduction?

The discovery of the process of transduction was traced back in 1952 when scientists Norton Zinder and Joshua Lederberg were studying the recombination in the bacterium Salmonella typhimurium. The researchers grew two different strains of the bacterium (one was met− his−, and the other was phe− trp− tyr−) on a medium with less nutritional components and when observed, no wild-type was found. Zinder and Lederberg, however, found out that when the two bacteria were combined, wild-type cells appeared.

While transduction is very common among bacteria, there are actually two kinds: generalized and specialized tranduction. The two are further elaborated below.

This is a method of transduction that allows genes to be transferred from one bacterium to the other. This happens when a virus accidentally transfers its genetic material, the same way it infects animal cells & plant cells, and other bacterial cells.

As it name suggests, this kind of transduction involves the specific insertion of the viral DNA to the host cell.

The process of bacterial transduction is very essential not only for bacteria and viruses but for living organisms in general. Below are the reasons why.

The amount of DNA packaged inside the head of the virus is largely dependent on the size of the head itself. The cutting of the host chromosome is done randomly, with all genes having the same probability of being packaged and transmitted to the vector.

2. Contributes To The Increase of Genetic Diversity

The process of bacterial transduction generally increases genetic diversity. This is very important as it allows organisms to adapt to any changes in their environment.

3. Serves As A Key To Antibiotic Resistance

At present, the phenomenon of antibiotic resistance is becoming widespread. Transduction is specifically important as it can explain the mechanism by which antibiotics become ineffective because of the transfer of the genes among bacteria.

Sure you have heard about songs or videos going viral. Where do you think that metaphor came from?