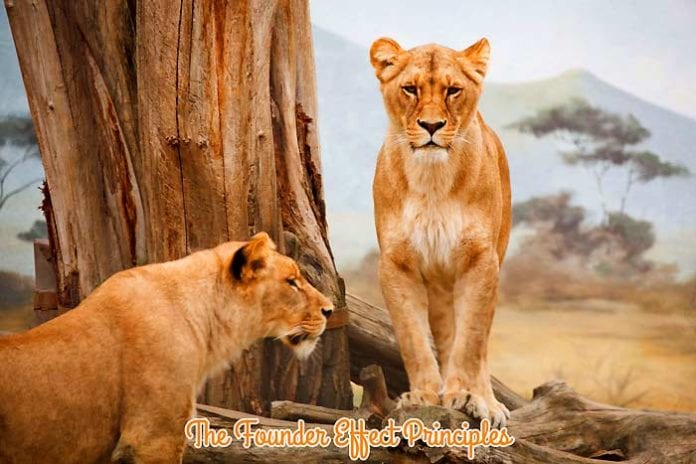 Founder Effect: As definite as they may seem, some biological processes could occur randomly. In fact, the evolution of some species of living organisms is believed to arise from such.

Several theories have argued about changes that occur in gene frequencies that trigger the generation of some species.

For instance, one particular principle was proposed and scientific-wise, it serves as a strong force in the origin of species: Founder effect.

Previously, we had explored the chromosomal mutations and Autosomal Recessive Inheritance. In this article, we’ll explore the principles of Founder effect, how it impacts existing living organisms, and several recorded examples of it.

What is Founder Effect?

By definition, Founder effect is the loss of genetic variation that occurs when a small group of individuals is separated from a larger group and then establishes a new population. Originally, Founder effect was proposed in order to explain the origin of islands located in high elevations. Now, it serve as an event to justify the origins of species.

A good illustration of this phenomenon can be seen below here:

During the 1940s, the discovery of the concept of the Founder effect can be attributed to scientist Ernst Mayr . Originally, Mayr called this phenomenon as the “peripatric speciation” or “founder-effect speciation“. In some New Guinea islands, Mayr observed that some populations of birds are very distinct from the main bird population. He hypothesized that this phenomenon could only occur by the isolation of a certain gene of the main population (resulting to bottleneck effect), genetic drift, and natural selection.

Throughout history, there have been several incidences where small groups of individuals move far from their home territories. By random chance alone, the new population develops different allele frequencies from that of the original population. Such isolation and evolution then lead to divergence between the two populations, with the founder population becoming a new species and being unable to interbreed with the former.

In humans alone, Founder effect can be seen to govern the transmission of genes in some populations. In fact, there have been several examples of Founder effect in human populations across the globe, with most cases being genetic disorders.

The following are some of them:

Huntington’s disease is a heritable progressive neurological disorder characterized by uncontrolled motor function, and loss of intellectual capacity. Individuals who inherit the defective dominant allele tend to lose their control over their brains, and not long after, will die.

Another genetic condition governed by the principles of Founder effect is Tay-Sachs disease. This disorder is known to destroy the neurons of the central nervous system and is usually fatal during early childhood.

Regardless of whether good or bad, Founder effect has indeed drastically affected populations. In addition to that, it has somehow contributed to the speciation and evolution of species present today.

Hence, a greater understanding of the evolutionary histories of the disorders in some populations will lead to the reduction of their further spreading in the long term; therefore allowing people to be informed of their reproductive choices. To date, most genetic disorders that were results of Founder effect still don’t have any cures yet.

And despite the advancement in technology, scientists are still puzzled by the questions:

How do these genes, which only exist in colonized environments, be common in some settings with such strong selection forces? Shouldn’t natural selection remove them already?