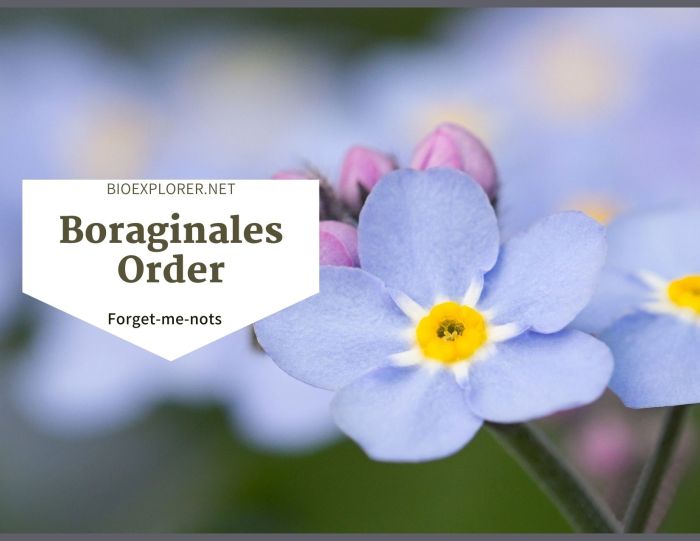 Boraginales is an order of flowering plants consisting of herbs, shrubs, or trees worldwide. Members of the Boraginales have simple and spiral leaves, usually monochasial of scorpioid cymes inflorescence, 5 sepals and 5 petals, and a profoundly 4-lobed ovary because of the false septa. The forget-me-nots, comfrey, and borage are ornamental plants under Boraginales.

Order Boraginales is placed under the asterid clade. The APG IV system of classification in 2016 places only 1 family, Boraginaceae, under the Boraginales. However, recent studies consider the order as having 11 families[2]. 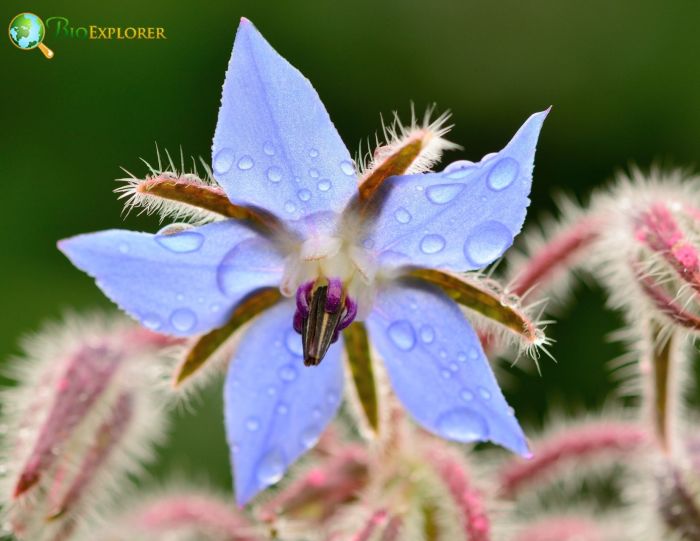 The species of the Boraginales order are worldwide in distribution. Boraginaceae (120 genera and 2000 species)[3] are found in temperate and tropical regions. However, there is an intense concentration of species in the Mediterranean region. 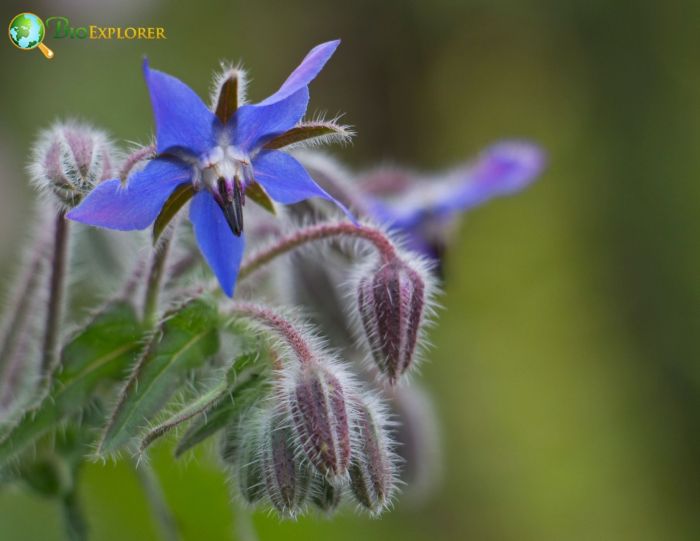 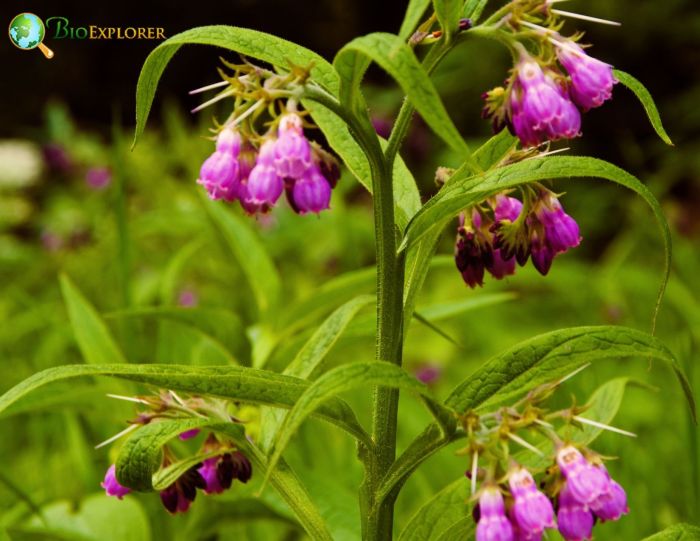 Boraginaceae flowers are actinomorphic, pentamerousWhat is pentamerous?Having parts in fives or multiples of five., and hypogynous. These flowers are sessile or pedicellateWhat is pedicellate?Borne on a pedicel; a flower characterized by having a stalk is also known as pedunculate or pedicellate; opposite is sessile (i.e., no stalk);, bracteateWhat is bracteate?Possessing or bearing bracts. or ebracteate, and bracteolate. The inflorescence is a terminal or axillary cyme or solitary axillary flower. 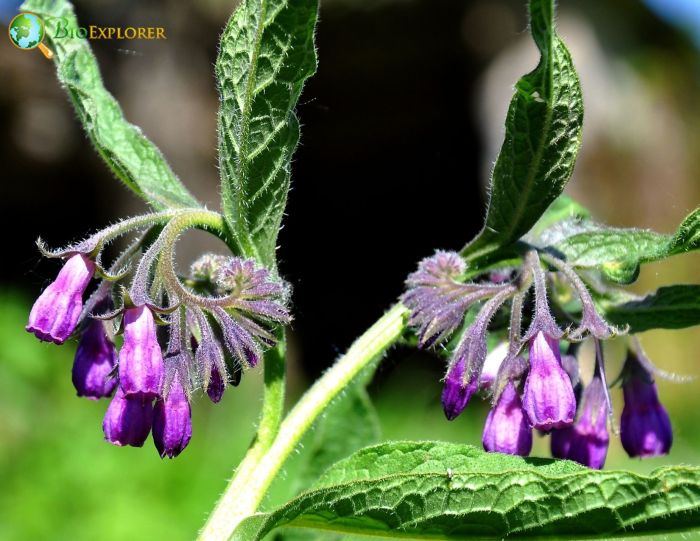 The flowers are coiled at first and uncoil as they open. The biseriate and dichlamydeousWhat is dichlamydeous?Having a perianth composed of a distinct calyx and corolla. perianth consist of 5 sepals in the calyx and 5 petals in the corolla. The calyx lobes are valvate and are often covered with trichomes. The white, yellow, pink or blue corollaWhat is corolla?A collective term referring to the petals of a flower. lobes are rotate, salverform, campanulate, or infundibular. These petals are imbricate or valvate. The flowers of the Boraginaceae are usually bisexual, and the pollination is entomophilousWhat is entomophilous?Pollination by insects. Contrast anemophilous (wind-pollination). via the Hymenoptera. 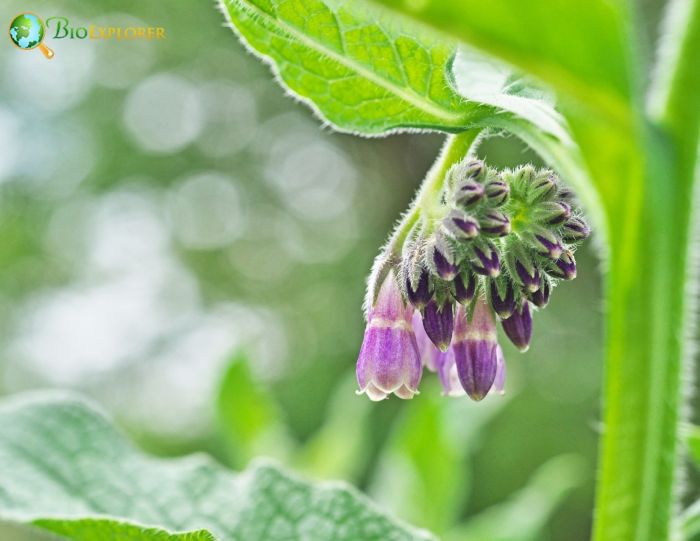 The Forget-Me-Not flowers[4] (Myosotis sylvatica) are tiny (about half an inch in diameter) with 5 white, yellow, pink, or blue petals. A single flower is found on the central stem. Additional blooms are found in the branching stems. The Myosotis scorpiodes have flowers in clusters. The flowers bent and curled like the scorpion’s tail.

These two species look similar but differ slightly in bloom time and growing conditions. The flower of field forget-me-not (Myosotis arvensis) is mostly pollinated by the Hymenopterans and small flies. However, the species can also undergo self-pollination. 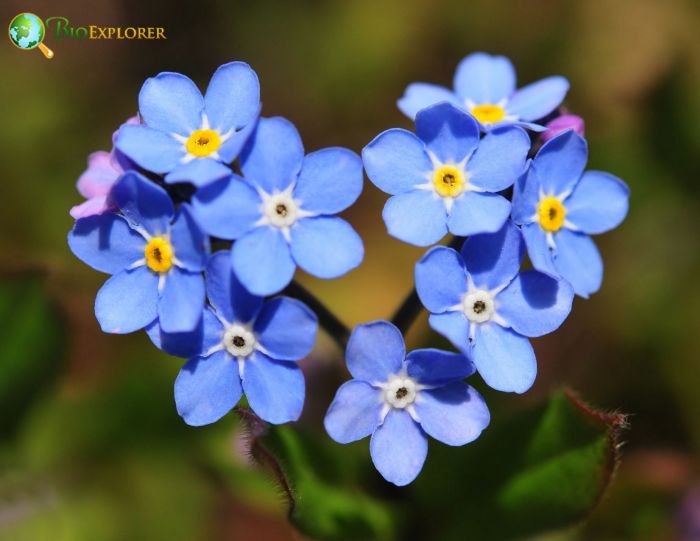 The starlike borage flowers (Borago officinalis) are complete and perfect. Each plant can produce a huge floral display. These flowers are in scorpioid cymes. There are 5 petals in the corolla; narrow and triangular-pointed. Often, the flowers are blue. Other varieties are pink or white. Species undergo geitonogamy.

Borage flowers are red in their early development and become blue when they age. The change in the color of the flower is associated with its pollination strategy.[5] Pollinators of the borage are insects, particularly bees. The reward is nectar. 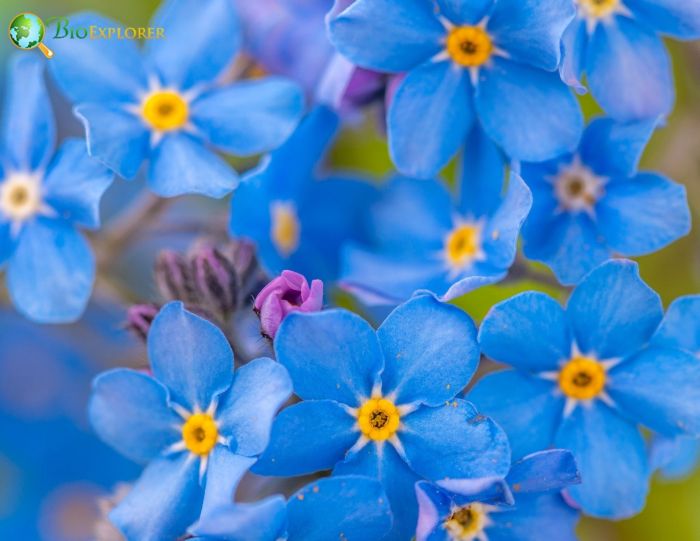 The plants of Boraginales are of limited economic importance. Most of the species are cultivated as ornamental. Others are used as herbs or sources of dyes. The following are the example species of the order Boraginales.