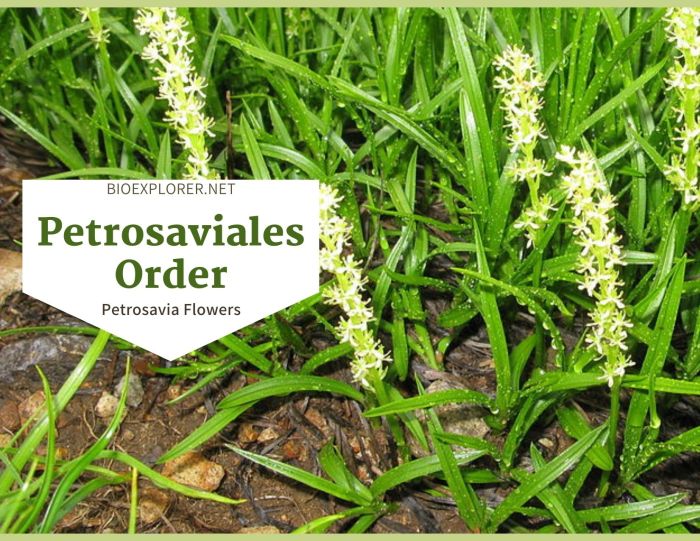 Petrosaviales, a minimal order grouped within the lilioid monocotsWhat is monocots?Angiosperm having only one cotyledon. Cotyledon is seed leaf; the first leaf (or set of leaves) to appear during the early development of a seedling., are found in eastern and southeastern Asia. plants of Petrosaviales have no laticifers and vessels in the axial system and possess simple, small, reduced (or absent) leaves. The flowers are bisexual, actinomorphicWhat is actinomorphic?A characteristic of the flower exhibiting radial symmetry such as starfish or Daisy flower; capable of being bisected into identical halves along more than one axis, forming mirror images. Opposite is Zygomorphic., and typically with six persistent tepals. Japolinorion osense and Petrosavia sakuraii are example species of the Petrosaviales order.

Species of Petrosaviales are found in habitats with high elevations. The genus Japonolirion has only one species found only in Japan. Habitats of the Japonolirion species involve grasslands, wetlands, and alpine meadows of Northern Japan (meadows around Mt. Shibutsusan) and Teshio province. Genus Petrosavi a members are distributed in Eastern and southeastern Asia. They are found in Eastern India, Japan, Southern China to West Malesia.

Below are the characteristics of Petrosaviales plants.

Petrosaviales flowers are pedicellateWhat is pedicellate?Borne on a pedicel; a flower characterized by having a stalk is also known as pedunculate or pedicellate; opposite is sessile (i.e., no stalk); with bracteates racemes. There are six tepals (persistent); 2 are whorled. Carpels are three, and septal nectaries are also present.

Order Petrosaviales only has one family (Petrosaviaceae) under it. Petrosaviaceae, in turn, is divided into 2 genera. The following characteristics differentiate the two genera from each other.

The three Petrosavia plants are: