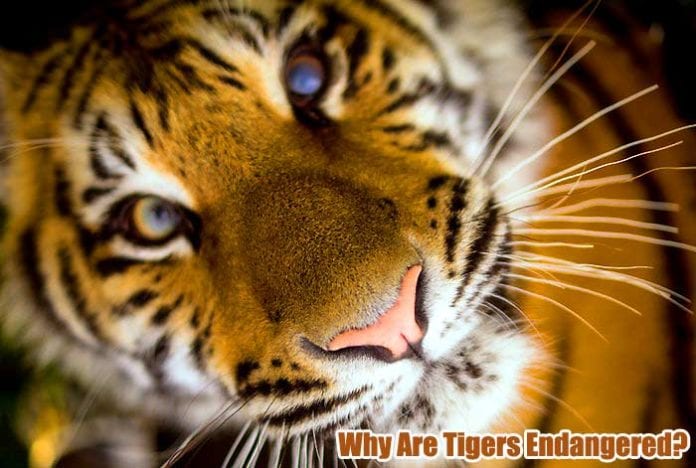 Why Are Tigers Endangered? Tigers (Panthera tigris) are known as the largest among the Cat Family (Felidae). However, they are also considered as one of the worlds most threatened animal species.

According to the World Wildlife Fund (WWF), the number of tigers has already decreased by 95% and the percent survival of tigers in the regions they resided ten years ago has reduced by 40%.

Here in this article, we will explore why are tigers hunted and why are tigers rapidly becoming endangered. Also, discuss the main reasons why these beautiful animals are slowly decreasing in number, and possibly become extinct. 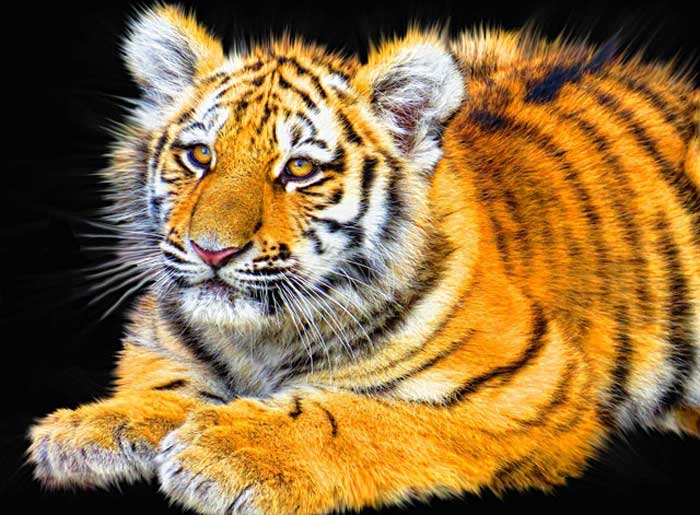 The tiger is considered to be one of the few animal species that has striped fur (aside from zebras). Such color allows them to blend with their environment and easily attack their potential prey. Interestingly enough, these stripes would still be seen on the skin even if the fur is shaved.

There were originally nine subspecies of the species Pathera tigris, but only six of them are remaining now. See endangered tiger species section below for more details. However, due to various reasons, three of them had already gone extinct, with an average of one per twenty years.

Why Are Tigers Endangered? 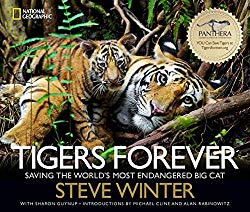 Countless reasons, mostly man-made, are responsible for the continuing decrease in the number of tigers. These reasons include habitat loss, climate change, illegal poaching, and retaliatory killings. They are explained below: 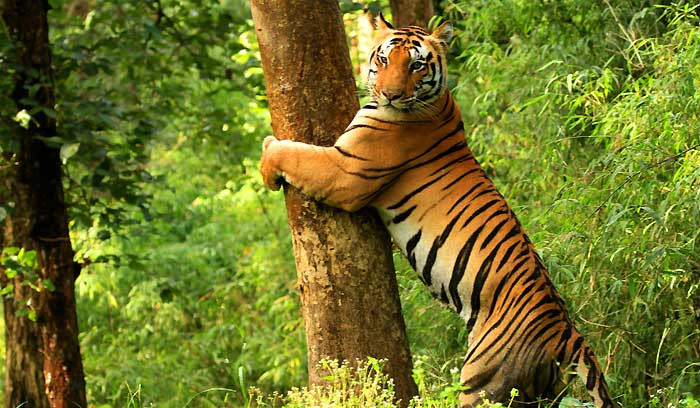 As the population of humans in the world continues to rise, the process of industrial development, urbanization, and agricultural growth remain to appear “evil” as such steal and break into the wildlife of their natural habitat.

Aside from the processes above, deforestation also contributes to a loss of tiger habitats. It is just quite saddening that the places that were once inhabited by these tigers have been turned into the most densely populated lands in the world. 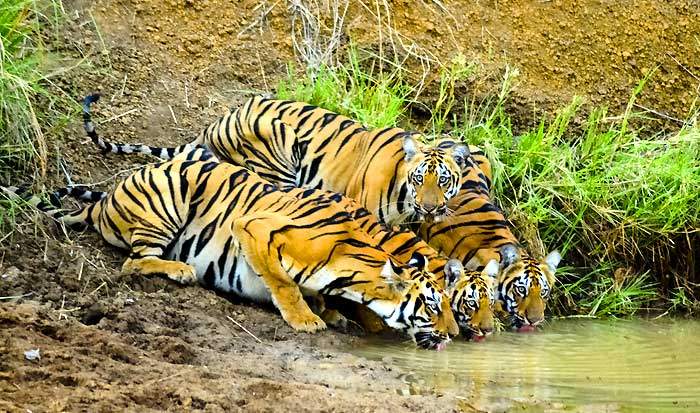 Tigers are known to be highly adaptable creatures, yet global warming brought about climate change is quickly going faster than their adaptation. The destruction of their habitats and loss of natural resources leads these tigers to become highly vulnerable.

Because of climate change, scientists think that some habitats like the Russian Far East can no longer accommodate tigers. Because of these, the population of Siberian tigers can be completely wiped out within a few decades. 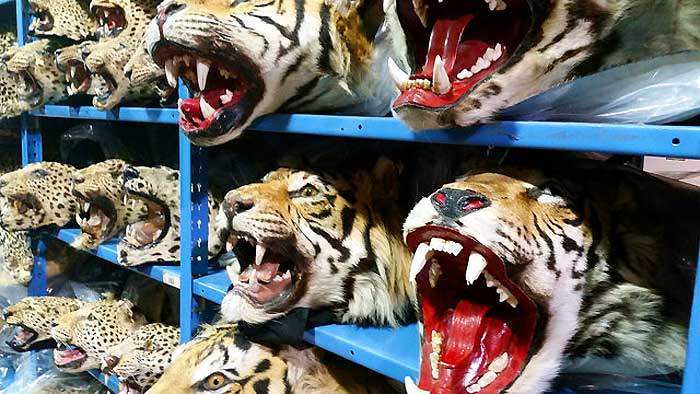 The process of poaching, the act of illegally killing an animal, is one of the immediate threat to tiger species. Because of being rare, tigers are considered to be extremely valuable.

To catch a tiger, traps are placed in locations where tigers are known to roam around. Once trapped inside, the tiger is left inside until it becomes tired from its attempt to escape. After that, it is then hit with a heavy stick to die. 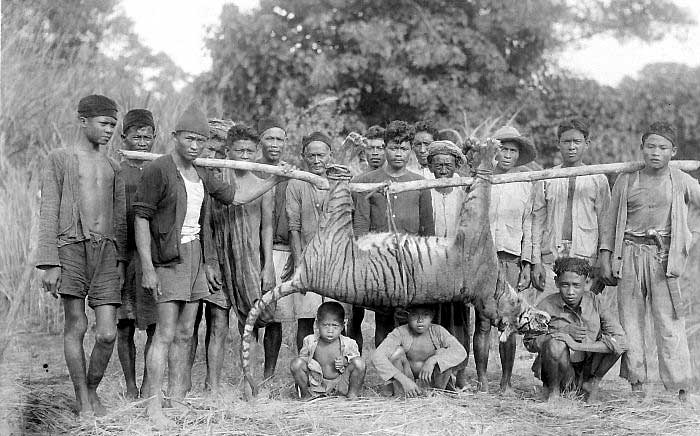 The next one is related to the reason mentioned above of loss of habitat. Since tigers are already desperate for food, tigers are left with the choice of going to human villages where livestock is present.

To reduce the number of tigers getting killed out of revenge, the Indian government gives compensation to cattle owners who lost their possessions as a result of tiger attacks. And because this process takes a very long time, villagers would still opt to poison the tigers, thereby reducing their number.

There are 9 sub-species of tigers. However 3 of them are already extinct. Here is the endangered tigers list: 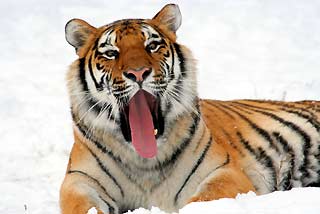 Currently, based on the recent survey, there are only about 550-600 Siberian tigers in the world. These tigers can be found in Russia, China, and North Korea.They were also called as Amur tigers. In the late 1940s, these Siberian tigers were pushed to the brink of extinction. Read more about Russian laws to protect these beautiful creatures here. 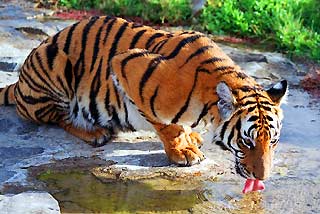 According to 1950s survey, there were about 4000 South China tigers in the world. Due to extreme hunting (China announced that these tigers were a pest in 1960s and allowed to be hunted), this species of the tiger was dying at alarming rates. Then in 1979, China made a new law to protect them from illegal hunting, According to 1996 survey, there were only 30 to 80 South China Tigers left in the world. Read more here. 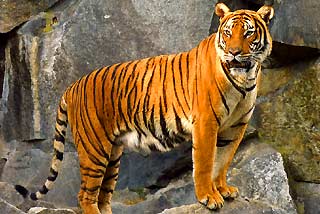 As of now, Indo-Chinese tigers are considered endangered as there are only 350 them in the world. These tigers were used to be found in South Asian countries such as Thailand, Cambodia, China, Lao People’s Democratic Republic, Myanmar, and Vietnam. They are extinct in Cambodia and other mentioned above have them in 2-digit numbers. The sad reality is that the population of these tigers has decreased by 70% from just from 2000-2010 alone.

In the last seven years alone, the population of Malayan Tigers has decreased by 25%. As per 2013 survey, there are only about 250-340 of these tigers left. Back in the 1950s, Malayan tigers used to be in 3000s. In 2015, IUCN bumped up the status of these tigers to critically endangered. 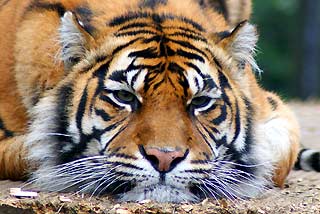 As per 1978 WWF survey, there were 1000 Sumatran Tigers, but the current Sumatran tiger count is less than 400. They can be found only on the island of Sumatra.The decline in the population is mainly due to poaching for their skins & bones and habitat loss due to palm plantations. Read more here. 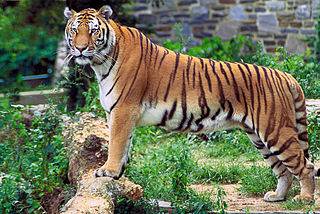 The Bengal Tigers are the resident of India, Bhutan, Nepal, and Bangladesh. Interestingly tiger is considered as a national animal for India, Bangladesh, Nepal, Malaysia, North Korea and South Korea. These beautiful tigers are continuingly decrease in population in the last quarter centuries alone. According to WWF survey, currently, there are about 2,500 Bengal tigers in the world. 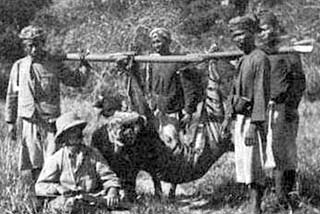 Before Bali tigers went completely extinct in 1937, they were the resident of Bali island in Indonesia. The main reason for their extinction is hunting (for both medicinal and aesthetic purposes) and habitat loss. More info here. 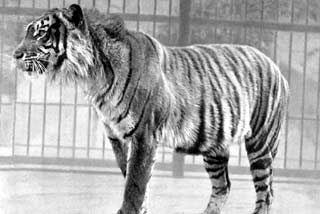 The Javan tigers were last seen in the 1970s and after that, they were declared extinct. One of the reasons why Javan tigers became extinct was due to habitat loss and loss of food (starvation). More info. 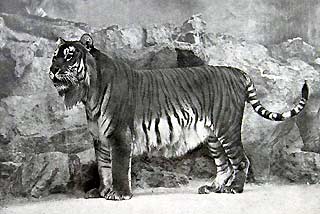 Another extinct tiger species in our list is Caspian tiger. They were initially from China, Iran, Turkey, and other countries but became extinct in the 1970s. The Caspian tiger was one of the largest felines in the world. This species of tiger died out because of hunting, but many laws have been made to protect them, but they were too late. Read more on the scientific attempts to bring this species of tiger back to life here.

Scientists predict that if these reasons continue, all tigers may be erased on this planet with the next ten years. To date, significant efforts are being put to increase the number of tigers, be it in captivity or the wild. Estimates of about 3,900 tigers are still in the wild, but more effort is still needed to preserve this species.

Can you think of ways to save these tigers?